Once upon a time, there wasn’t a single card-based game on Nintendo Switch, but now we have loads. We have the post-toys-to-life Lightseekers, the challenging warfare of Warhammer Age of Sigmar: Champions and the all-out silliness of Super Dragon Ball Heroes: World Mission – and there’s even The Lord of the Rings: Living Card Game looming on the horizon (amongst many others). We might not have Magic the Gathering or Hearthstone (well not yet, anyway), but the collectable card game genre is very much in rude health on Switch. And now one of the biggest names in the genre – Yu-Gi-Oh! – is finally ready to bring its monster-filled library to the platform in predictably outlandish style.

Let’s cut to the chase. If you’re a fan of the Yu-Gi-Oh! Trading Card Game you’re going to love Yu-Gi-Oh! Legacy of the Duelist: Link Evolution. Well, mostly. With 20 years of card updates and additions to draw from, this new virtual card battler includes a vast number of cards introduced over the last two-plus decades. That’s over 9,000 individual cards to choose from, enabling you to build and customise decks with traps and monsters from the earliest iteration of the game right through to some of the most recent expansions. Whether you’re a lapsed duelist or a dedicated player, the sheer commitment to its own archives is staggering. Sure, you haven’t got every card there is (the new Duel Power expansion isn’t included), but to be fair, it’s also a very new addition. 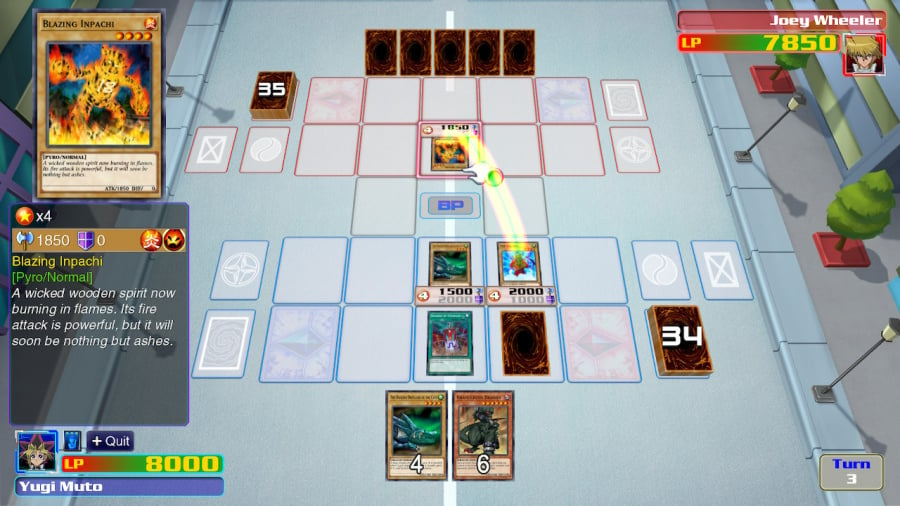 That same sense of authenticity extends to its very sizeable campaign as well. Split into six chapters (covering all six seasons), it covers all the major story beats from the seasons so far, including many of the biggest and most memorable battles. From ZEXAL to ARC-V, you can relive some classic duels from both sides, enabling you to double the rewards as a result. Each chapter has around 25-30 battles each, so you’re getting a good 30 hours of play (and that’s not counting the reverse matches). With the inclusion of the ‘new’ Link Monsters (a type of card that doesn’t sit in your main deck or hand, but effectively enhances those that do), you’re getting every aspect of the modern game. Link Summoning was only introduced to the real-life TCG in 2017, so it’s great to see this enhanced ruleset included here.

The campaign’s AI is still a little too unpredictable, however. The game originally appeared on PS4 and Xbox One in 2015 and while developer Other Ocean Interactive has gone all-in on the content, the randomness of its difficulty hasn’t been addressed. The random nature of CCG – and the lack of any tangible difficulty modes for the AI – means you can often end up with a poor or near unusable hand when facing some of the really tough duelists towards the end of each chapter. By the same token, you can end up with a super-OP hand and just wipe the floor with the same opponent. It’s inconsistent enough to be annoying, especially for a four-year-old reissue. 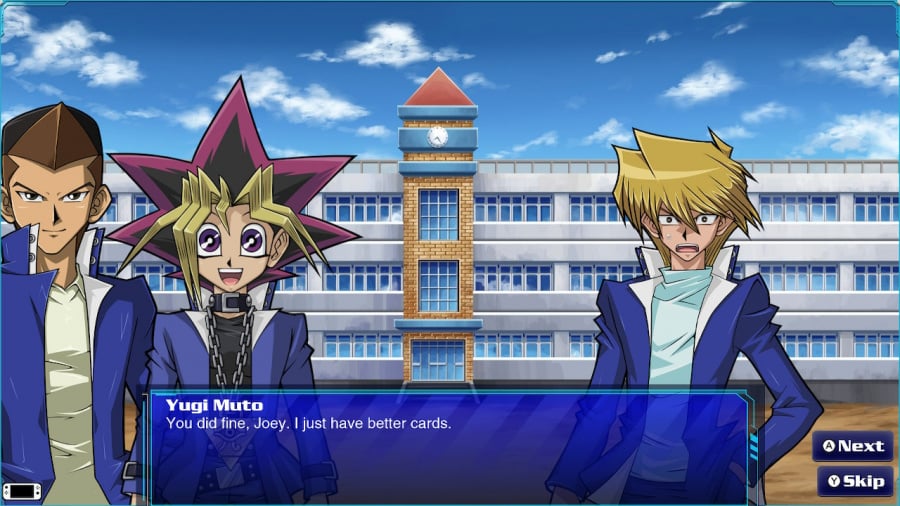 We mentioned earlier that Link Evolution benefits from some considerable content benefits, and we’re not kidding – the previous console versions had around 7,500 cards, while this update has over 9,000. Switch players also get all of the DLC the game has received over the past few years, so you’re getting as close to a comprehensive package as it’s possible to get. You also get some exclusive features, but these are more inherent to the platform, such as full touchscreen support when you’re playing in handheld mode. This is, by far, the best way to play Link Evolution. Alongside the sizeable single-player content, there’s also support for local and online play, although the latter has some caveats.

In terms of performance, Link Evolution is both an improvement on the previous version of the game and a bit of a letdown. Some of the nauseating animations that were rolled out after playing certain monster cards in the previous version have been removed, so you’re not forced to endure them this time around, but you there’s some noticeable lag when playing online, with actions that take far too long to complete. Bizarrely, this issue does crop up in single-player sometimes as well when the AI bizarrely takes too long to react to your strategy. Previous Yu-Gi-Oh! titles didn’t suffer from this issue, so we’re hoping the developer and Konami address it otherwise it’s online community will die out like it did on PC. We also experienced the occasional hard crash, which is a real pain when you’re 15 minutes into an online match. This is an issue that’s plagued this game since its original release, and, sadly, it’s followed the game onto Switch, too.

There’s no doubt that Yu-Gi-Oh! Legacy of the Duelists: Link Evolution has a few problems of its own – the delays between actions and the randomness of card deliveries still rankle – but that doesn’t stop this from being the best version of the game yet. Hardcore devotees will notice that its 9,000+ card archive is missing a few key special cards, but as a virtual representation of the long-running TCG, this is a formidable beast. With no microtransactions, a constant stream of cards to unlock and a streamlined recreation of all six seasons of the anime, this ranks as one of the best CCGs on Switch – if you can overlook its somewhat irksome issues.

Review: Alien: Isolation – One Of The Greatest Horror Games Of...