There’s been quite a few cracking games based on the Wild West over the years, most notably Rockstar’s acclaimed Red Dead Redemption and its sequel. There’s no sign of either appearing on the Switch anytime soon, but here we have a rather intriguing little horror-western game by Draw Distance. Horror western?! An interesting idea, right? Let’s see what it’s all about.

Draw Distance might not be a name that rings too many bells, nor might even their previous moniker of iFun4all. Despite this, the Poland-based developer’s horror credentials are pretty impressive, including the upcoming Vampire: The Masquerade – Coteries of New York and Halls of Horror based on horror-themed board games of the same name. Ritual: Crown of Horns is perhaps the most intriguing, being a more traditional action game with a western twist.

The comparison with Red Dead Redemption doesn’t go much beyond the fact that they’re both westerns, because this is a very different type of game indeed. In Ritual: Crown of Horns, your mission is initially to track down a witch and dispose of her on behalf of the government. However, you end up being slaughtered by horned beasts curiously sent by that very same government. In the aftermath, you are resurrected by the same witch you were trying to kill, and enter an unholy alliance against the beasts who would hunt you down. We don’t think there’s a Clint Eastwood movie about that one. 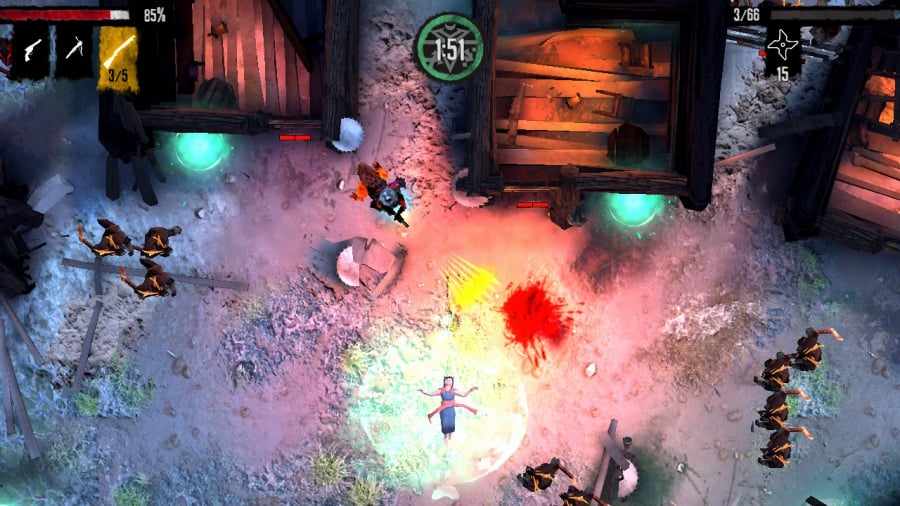 At its core, Ritual: Crown of Horns is a ‘horde’ game. Players are placed within relatively small arenas, beginning with staple horror settings such as graveyards or cabins in woods before moving to much more diverse terrains. Within these arenas, you must stand your ground against the swarms of incoming beasts until the time limit expires. The swarm starts off relatively small before slowly overwhelming players as they enter the final minute. The plot twist is that you must also protect the witch (usually in the centre of the arenas) while she performs a ritual. When the timer runs out and the ritual is complete, she will dispose of the remaining enemies with her magic. But if the witch dies, it’s game over. This necessitates a huge amount of strategy as moving around any distance away from the witch exposes her to the enemies, while staying on one place will see you overwhelmed in no time. This balance becomes much harder to manage as you progress, because the witch herself may not necessarily stay in the same spot.

Of course, you have quite the arsenal with which to dispose of your foes. This starts with your regular revolver, before being shortly complemented by the good ol’ shotgun. Plenty more options become available as you progress, ranging from rifles to crossbows. However, since this isn’t your regular western, you also have access to an increasing range of spells. These are invaluable when the horde of enemies becomes a bit too much and you need something extra to keep them away from the ever-busy witch. To use these spells, you must collect the souls of those you have slain; the more you kill, the more you get to kill. These spells also stack, meaning that players can save them for the latter half of the stage when the number of enemies becomes a real problem. In addition, the game also drops various power-up during play to aid you on your way, granting perks ranging from a faster reload speed to an increased number of souls released per kill. 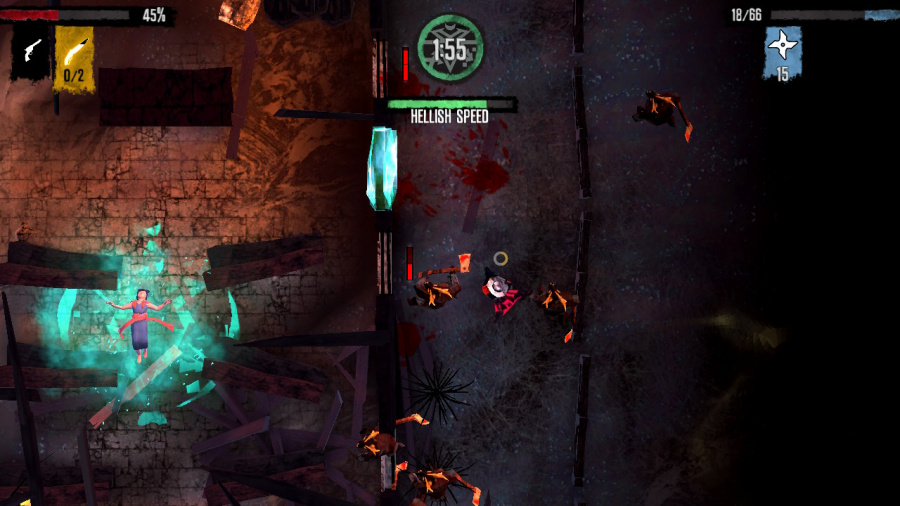 Additional gear can be purchased from the witch inside the safe haven, as well as choosing which weapons and spells to equip. You will absolutely need to do this, because Ritual: Crown of Horns isn’t messing around when it comes to difficulty. The game has no pretence about being anything other than a challenge right from the get-go, but this certainly isn’t a title where you can just blast everything in sight and hope for the best. A fair amount of practice and repetition is required to learn the enemy patterns, especially when you’re trying to grasp the ropes of the game. Newcomers are encouraged to tackle the challenge maps to help them get to grips with things; these involve replaying previous levels with new objectives to achieve. Properly mastering each level is the key to progression here; you really can’t just hope for the best.

As for the gameplay, this is essentially a classic arcade top-down shooter, albeit confined to much smaller arenas than players might expect if they’re used to something like Hotline Miami. Players traverse the stage exactly as you’d expect, with the dash feature being often being the difference between life and death. The shooting mechanics do a lot to define the experience, but could also prove to be divisive. You have a full 360-degree range of fire as you’d expect, but the caveat is that players must actually press the aim button to aim before firing, rather than simply having a fire button which fires at will, like you’d expect. 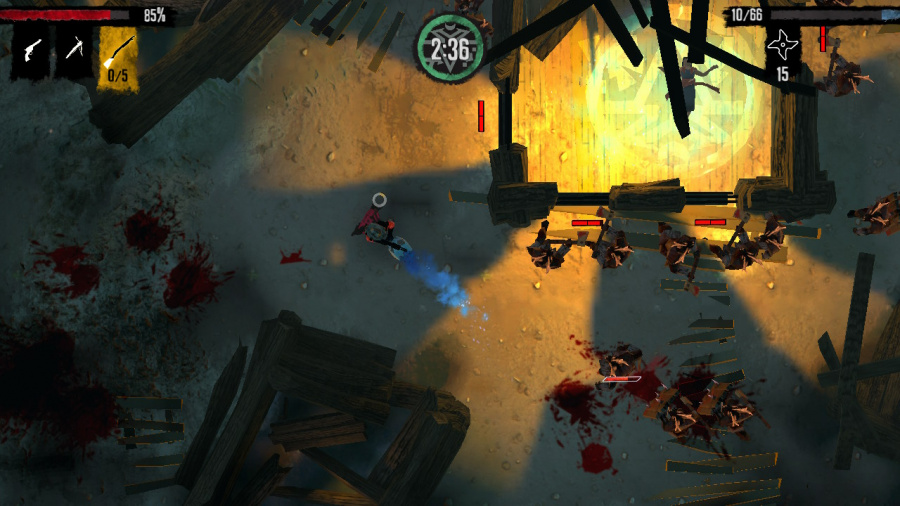 Veterans of very different horror experiences such as Resident Evil will know what to expect here, but the fast pace of this game combined with the sheer amount of foes to deal with does make this challenging. The right stick is then used to change between targets, as well as the direction which you are facing. Players have to master when to aim, when to shoot and when to reload, and this will likely necessitate numerous attempts at a stage until this is achieved. This isn’t a criticism; just something that really needs to be emphasised – some players will love the mechanic and how it forces them to consider their actions, while others may find it clunky and unintuitive.

Still, it is this requirement to learn the game’s mechanics and how to best work around its intentional limitations which makes Ritual: Crown of Horns so rewarding. This isn’t simply a case of playing until you scrape through the stage; it is thinking about the best course of action throughout the entire three minutes or so granted to you, which enemies to take out and when, saving the spells for when you expect a particularly big swarm to approach the witch, thinking about how many bullets you need to expel before needing to take a second or two to reload, and being prepared to keep doing all of this until you finally master the stage. It is hugely rewarding, as long as you have the perseverance, and to see the game’s mechanics as an intentional challenge rather than poor implementation. You’ll be rewarded, but expect to work for it. 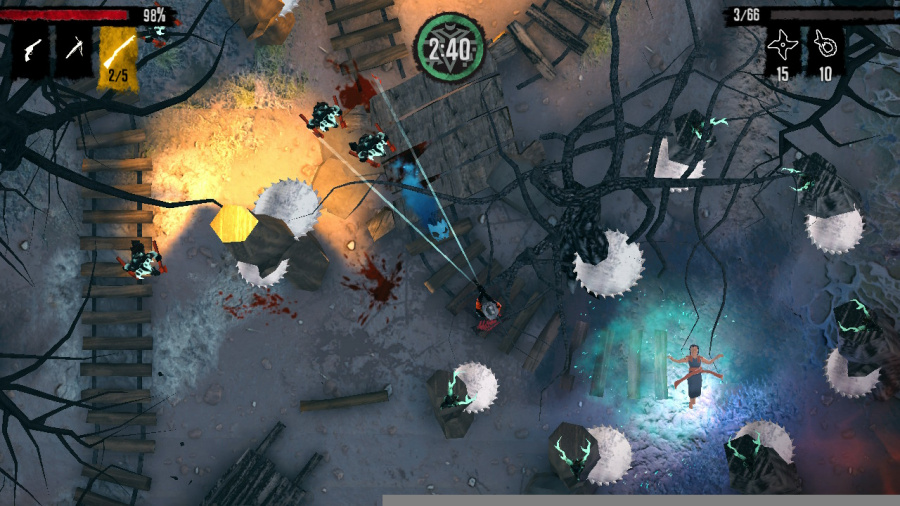 In that sense, there is absolutely a place for a game like Ritual: Crown of Horns on Switch. This isn’t something you can kick back and have some fun playing lazily for five minutes, but if you want some decent arcade-style challenges and rewards, it certainly delivers. The curious western horror setting is the icing on the cake that makes this outing even more interesting.

Ritual: Crown of Horns is a challenging yet hugely rewarding western-horror themed action game which will go down well with veterans of the ‘horde’ genre. The difficulty bar may be set a tad too high for casual play, and some people will never get used to the mechanics, but everybody else will have a gun-slinging blast with this one.

Epic's Game Store Isn't Ready for All Its Exclusives – IGN

Human: Fall Flat is Getting a Big Free Update on April...

Crackdown 3: Why a Good Deal Doesn't Make a Game Score...