Okay, here’s the thing… Resident Evil 6 isn’t that bad. Wait, hold on, just hear us out. First released back in 2012, it genuinely felt as if the once mighty survival-horror franchise had hit rock bottom. Atmospheric environments and terrifying, lethal enemies were replaced by sprawling cities, gun-toting mutants, and explosions that would make Michael Bay green with envy. Thinking this was the direction the series was heading in, many fans understandably jumped ship. But time is a funny thing; now that Capcom has steered the franchise back on course with Resident Evil 7: Biohazard and a delightful remake of Resident Evil 2, we can look back on Resident Evil 6 with fresh eyes and appreciate it for what it is: an absolutely bonkers action title. Does it hold a candle to the earlier games in the series? No. But it’s also not quite the atrocity many make it out to be.

Bringing Resident Evil’s ‘action era’ to a grandiose conclusion, the sixth main entry is crammed full of recognisable characters, huge set-pieces, and perhaps the most impressively over-the-top iteration of the Mercenaries mode to date. If Resident Evil 5 dialled the action up to 11, then Resident Evil 6 rips the dial right off and shoots it with a rocket launcher. The main story mode is split into four campaigns, each of which is comprised of several meaty chapters. Co-op play is once again thrust into the limelight, and whichever campaign you choose to start with (apart from Ada’s), you can either play it with a buddy or settle for an AI partner. The good news here is that playing on your own is a much more tempting prospect than it was in Resident Evil 5. Capcom nailed how an AI partner should behave, and you’ll never feel like you need to spend time babysitting, reviving, or managing your partner’s inventory every 5 minutes in Resident Evil 6. They pretty much just look after themselves, leaving you to worry about your own backside. 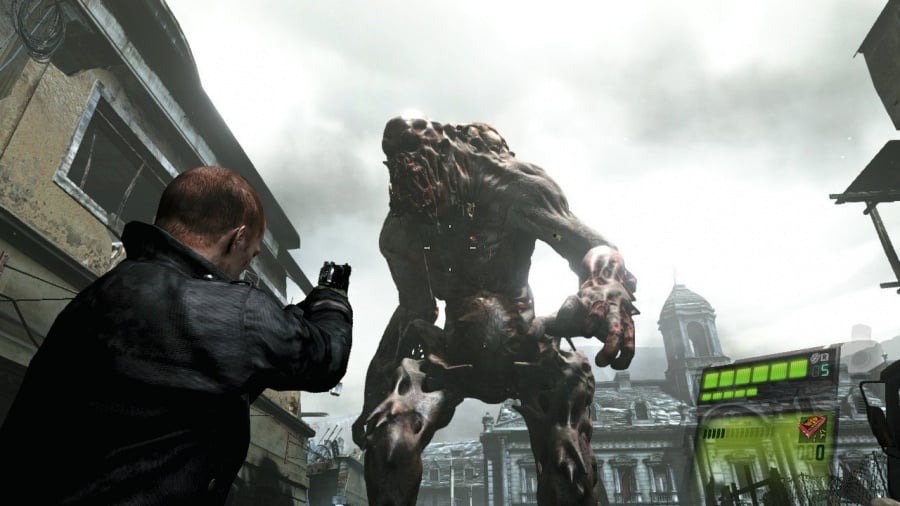 The gameplay is another evolution of the over-the-shoulder view made famous from Resident Evil 4. General movement is a huge improvement from previous titles, ditching the tank controls completely to allow for a more aggressive approach to combat. You can dive in any direction, shoot from the ground, kick and punch enemies at will, and perhaps most crucially, move and shoot at the same time. Even for a straight up action title, the controls are remarkably versatile, and you’ll feel like you’re more than equipped to take on even the most fearsome of foes. This is a large part of why Resident Evil 6 was so lambasted upon release, because it effectively removes all sense of fear, but it actually feels really good in practice if you’re willing to embrace the absurd action.

There are, of course, multiple areas where the gameplay falls short. The herb system is frustratingly complex – rather than simply selecting an herb and replenishing your health, you have to first convert them into tablets, with one green herb making one tablet, two green herbs making three, and a mixture of green and red making six. Each tablet then restores one bar of your health meter. It’s quite frankly ridiculous, and we’d have much preferred the more simplistic spray system from Resident Evil 5. To exacerbate this issue, the menu system as a whole is horrendous, with each playable character having their own unique menu design. It’s needlessly complicated, and if you want to alter anything in the options menu, you’ll spend a good few moments just figuring out what each icon actually represents. And yes, quick-time events are sprinkled generously throughout the game, so if you’re not a fan, then just brace yourself. 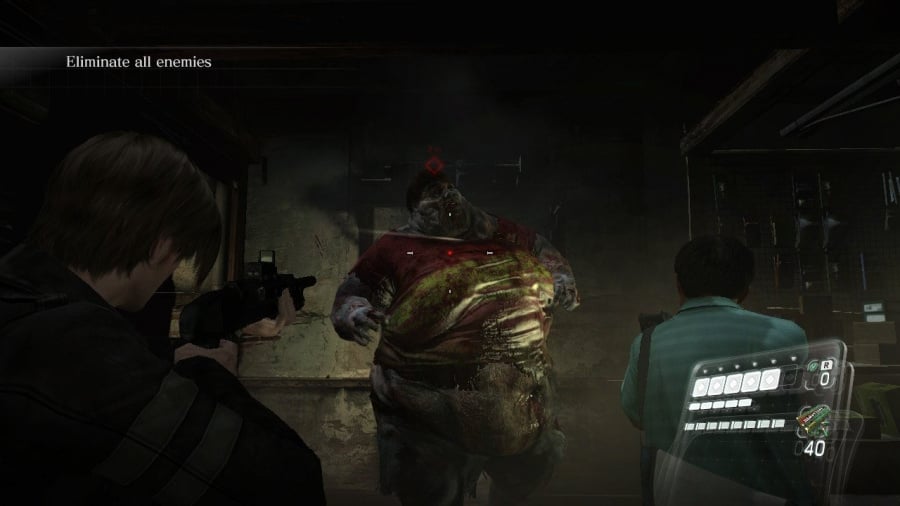 The story itself is pretty hit and miss, overall. It feels like Capcom ran out of steam here, because the plot feels pretty inconsequential for the most part, and it’s downright awful at numerous points. The new main villain, Derek C. Simmons, can’t match up to the greats like Albert Wesker, Osmund Saddler, and Alexia Ashford, and even the returning protagonists feel like shadows of their former selves. Leon Kennedy retains almost none of his charm and wit from Resident Evil 4, and Chris Redfield spends most of the game in such a reclusive state that you’ll find yourself yearning for the days of Jill sandwiches and Ramon Salazar’s pesky ‘right hand’. It’s deliberately bleak, but feels like a step too far, and the overly serious tone is constantly at odds with the ridiculous set-pieces.

Thankfully, despite the disappointing storyline, it’s the smaller moments that really stand out: defending a gun shop from swarming zombies, storming an apartment block to locate survivors, riding atop a speeding train whilst fighting off a hideous bio-organic weapon, and many more memorable scenes make for a tense, exciting experience. The pacing is pretty spot on considering the sheer size of the game compared to previous entries, with an excellent variety of environments to explore, and the separate campaigns feel different enough from one another that, at the very least, they rarely feel particularly repetitious. 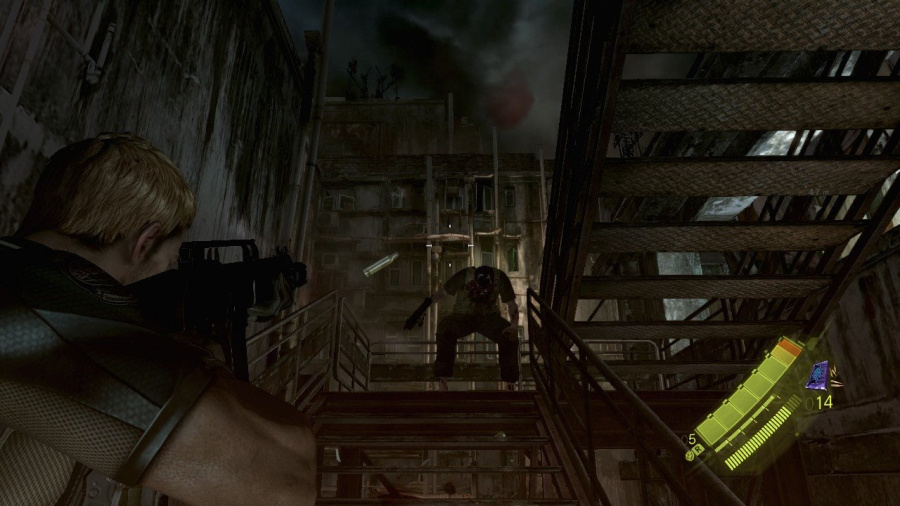 Aside from the main campaign, Mercenaries mode makes a welcome return, and it’s genuinely better than ever. Multiple characters and costume unlocks encourage multiple sessions, and there’s a good selection of stages to choose from. Additionally, a more difficult option called Mercenaries No Mercy features an absurd amount of enemies on screen at once, and it makes for an incredibly tense session as you constantly struggle to fight off the overwhelming horde. There are other modes, too, such as the multiplayer-focused Predator and Onslaught modes – these are fun in their own right, but don’t really compare to the addictive nature of Mercenaries mode.

Performance on Switch is much the same as Resident Evil 5. It runs well enough for the most part, targeting 30fps and mostly hitting it throughout the campaigns. It dips here and there, but unless you’re actively looking out for it, chances are it won’t hinder your enjoyment of the game that much. Gyro aiming has also been added via a patch, and it works really well in both handheld and docked modes, arguably giving you far more precision than a standard analogue stick would be capable of. You can also use both control methods in tandem, so you can use the analogue stick for more sweeping movements, then switch to motion controls for fine-tuning.

Resident Evil 6 will always have its fair share of naysayers, and that’s completely fine. It’s easy to disregard it thanks to its blatant effort to appeal to as many gamers as humanly possible, and in doing so largely losing its identity in the process. But it’s certainly not a bad game, and in terms of pure gameplay, it’s arguably far more accomplished than its immediate predecessor, albeit with a more disappointing story-line. If you’re after a straight-up action shooter, you could do a lot worse than Resident Evil 6, but if you’re looking for an experience similar to the earlier games in the series, then you definitely won’t find that here.