TECHMONEYFIT.COM
More
Home Technology Gaming Review: RAD – A Gnarly Roguelike Which Is Let Down By Balance...

Double Fine has long since made a name for itself as a rather ‘out there’ studio that nonetheless produces quality work, such as Brütal Legend, Psychonauts, Headlander, and Costume Quest. Its latest release, RAD, fits right in with this lineage, blending in crazy ’80s themes with an action-heavy roguelike gameplay loop. It’s a game that prides itself on unpredictability, in everything from character design to overall progression, drawing you ever deeper into its alluring depths. It’s also a game that can be frustrating, and not always in good ways. Still, all the elements necessary for a suitably enjoyable roguelike are present and accounted for, making for an experience that’s sure to make a lasting impression, despite its issues.

RAD follows the story of people living in a world that’s endured not just one apocalyptic catastrophe, but two. Right off the bat, that’s ridiculous enough, but things only continue to get weirder when we’re shown that the few remaining people left are bizarrely stuck in a neo-’80s pop culture rut and seem to be just as worried about ‘radness’ as they are about surviving. In this strange world, things have taken a turn for the worse and the small colony your character is living in is quickly losing power. Left with no other choice, the keytar-wielding Elder gathers up all the teenagers and grimly explains that one of them will have to venture forth into the radioactive hellscape of the Fallow to reactivate ancient prewar tech and give humanity another chance. 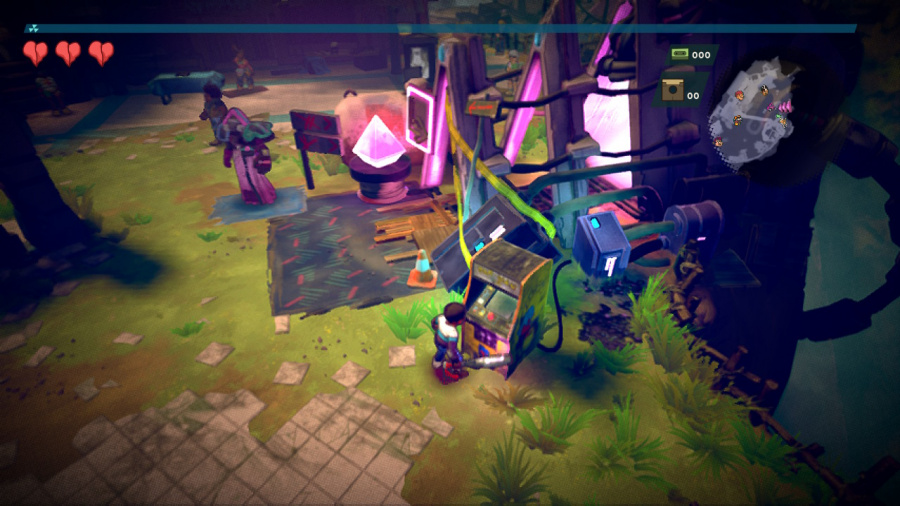 As far as plot goes this is actually a reasonably interesting setup that gets more mileage than you’d think. Roguelikes aren’t exactly known for their A-grade storytelling, and though this isn’t one that you’ll find yourself coming back to for its story, it’s a cut above the usually contrived or needlessly vague plotlines of most other releases in the genre. Bits and pieces of what events led to the broken world are gradually dispersed to the player through hidden lore towers in certain levels, which all tell of the events through the often whimsical lens of these post-war people, such as how it’s stated that ‘The Ancients’ (modern-day humans) preferred their wars “cold”. Supporting all this is a humorous and quirky cast of characters that feel right at home in Double Fine’s wheelhouse, such as a man-goat named Billy who tends a small garden, or a gatekeeper named Bob who’s unusually proud of the fact that he can do activities with two hands.

RAD follows a formula that by now has become tried-and-tested countless times in the roguelike genre, presenting players with a series of excessively difficult levels that can feasibly be beaten in an hour or two, but will likely take dozens (if not hundreds) of repeat runs before finding that perfect run where your own dexterity and the mercy of the RNG generator work together in harmony. Each level of RAD is randomly generated and features a semi-open environment in which you must find and turn on a series of respirators that open up the door to a boss fight. Along the way, you’ll fight mutants, pick up cassette tapes (RAD’s currency) and floppy disks (keys to doors and chests), and hopefully find a recovery item or two for later use. Once you overcome the boss, you’ll then be allowed to step through a portal to the next level. Rinse repeat until you either manage to come out on top, or die a horrible death at the ruthless hands (pincers?) of the monstrous mutants that rule the Fallow. 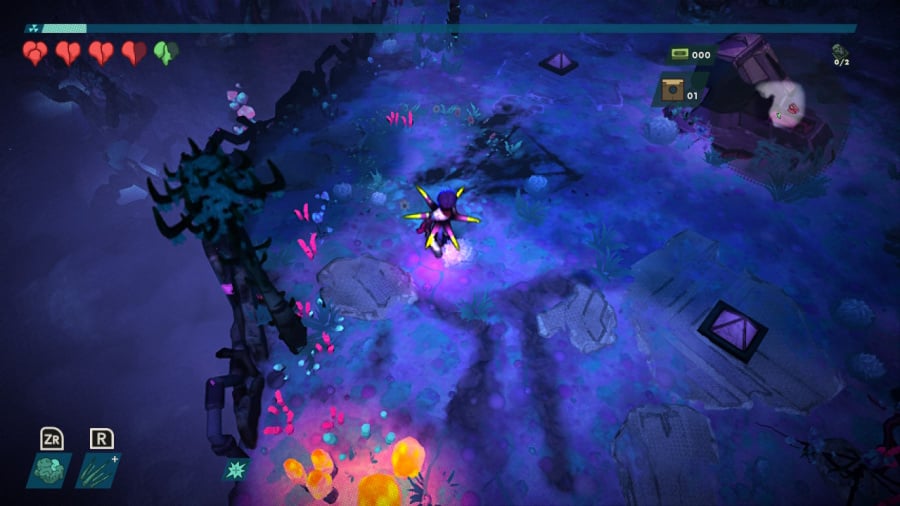 You’ll start out each run with a simple bat or club in hand, and while it obviously isn’t the ideal way to make progress, there’s a surprising number of hack ‘n’ slash combos and chainable moves that can be pulled off with it. For every mutant you manage to crush, your character absorbs some RADs and progressively fills up a bar at the top of the screen. Once maxed, the bar resets and your character undergoes a painful, disfiguring mutation that ultimately grants them a new boon in combat. These mutations are entirely random and boy are they weird. One of our favourites is Teenybopper, an arm mutation that causes an angry creature with its own arms to sprout off of your arm and go on occasional manic rampages with a bat. Another great one is Cobruh, which sees your character’s head replaced by that of a giant snake which has extra range and can poison enemies with its bite. You never know what’s going to happen when that RAD bar fills up, and the results are often as amusing as they are useful.

On the other hand, however, this randomness proves to be something of a double-edged sword that also stands as RAD’s greatest weakness. Many roguelikes have fallen into this same issue, wherein the synergies and builds available to you during any given run aren’t quite as balanced as one would like. Though it is, of course, feasible to complete a ‘naked’ run with only the starting bat and nothing else, most players will need a solid collection of power-ups to push through some of the tougher boss fights but there are only certain setups and mixtures of abilities that feel truly ‘endgame viable’. 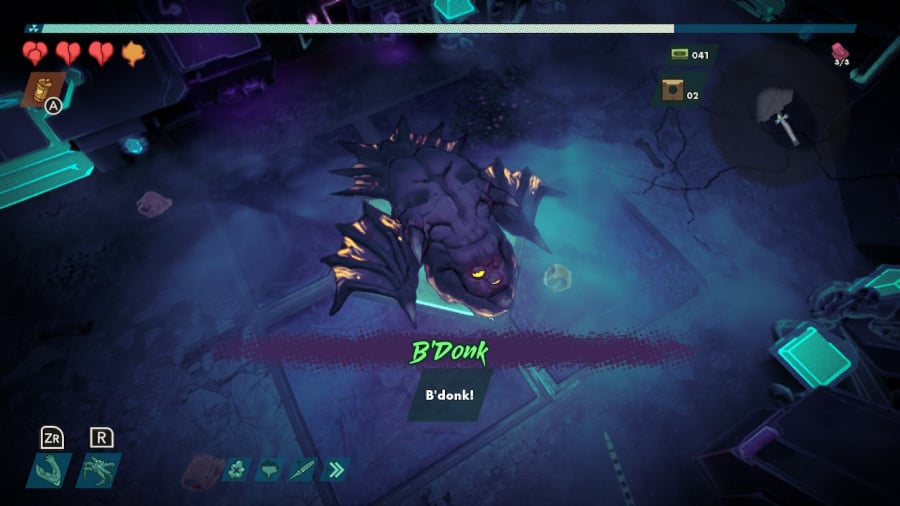 Sometimes, all the effort that goes into finally getting another mutation ends in bitter disappointment as you’re handed a near-useless power-up that doesn’t do much to improve your current situation. Now, every mutation can be good in the right circumstance, but sometimes you don’t have all the pieces, such as when you’re given a mutation that boosts ranged damage even when you don’t actually have a ranged attack. The short-form nature of RAD helps to keep this RNG issue less irritating than it could be – at worst you’re only losing a single run’s progress – but we still feel there could’ve been more attention paid to balance. Some runs are just doomed to fail, and it can be discouraging to see a current attempt shaping up to be one of those hopeless journeys.

Luckily, there’s more to RAD in terms of progression than whatever it is you can accomplish in a single attempt. After every death, your mutant kill count is tallied up and converted into points that go towards an overarching experience bar, and once that fills up, powerful new mutations and weapons are added into the pool to spice up your future attempts. Also, the town you start in acts as a central hub that you can revisit after boss fights and it features a variety of services to make each new attempt that much easier.

There’s a bank that can hold all your extra cassette tapes for later use, whether that be later in the run or when you start over. A local shop has a variety of helpful consumable items to up your survivability, and it grows its inventory over each run as you spend more. A garden can be cultivated to grow crops that can bolster your health and fighting capabilities. These services can prove to be lifesavers on many occasions, and watching the town slowly grow as you, the player, become more skilled with each attempt has a delightfully satisfying feel. 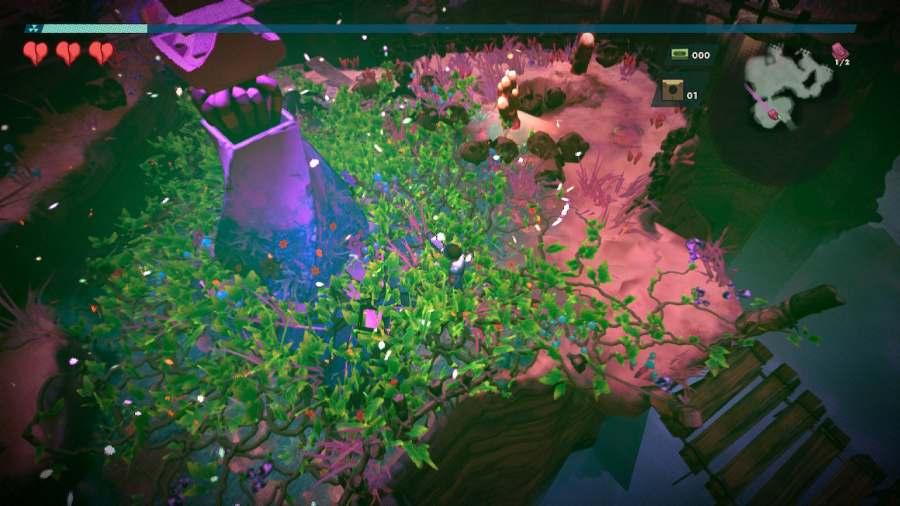 Simply making it to the end of RAD is no mean feat on its own, but there’s a modest amount of other content to keep you replaying for hours on end. For one thing, there are multiple endings to be seen, many of which have secret requirements, and the ever-expanding bestiary of mutations, enemies, and lore entries just begs for you to fill it out in its entirety. If that’s not enough, there are also leaderboards that show how you’re doing relative to your friends and the rest of the world, and these are supplemented by a global ‘daily run’ which gives you one shot to get as far as you can in a fixed world. For those of you that are particularly susceptible to the entrancing wiles of the roguelike genre, there’s plenty here to keep you coming back for dozens of hours.

RAD features a strikingly stylish acid neon art style to accompany the ’80s aesthetic, but it unfortunately isn’t allowed to fully shine on the Switch’s humble hardware. Playing in docked mode looks great, but as soon as you go into portable mode, the dynamic resolution begins to interfere with visibility. Lines blur and colours bleed into each other, making for an environment that can occasionally make it difficult to discern where you, enemies, or other objects of interest are on the screen.

It’s not unplayable by any means, but it’s far from ideal; we feel that we missed a few secrets and took a couple hits more than we would’ve if the resolution were higher. The trade-off of this is that performance is kept reasonably stable – docked or handheld – which is important for an action-heavy title such as this where a single mistake can cost you an hour’s worth of progress. Whether you choose to buy this on the Switch or on a rival platform will likely depend on how much you value being able to play on the go, but just be aware that the overall experience in handheld mode is middling. If you can, we’d recommend you play this one on a TV.

RAD doesn’t do anything particularly new for the roguelike genre, but it doesn’t necessarily need to in order to be an enjoyable game in its own right. The over-the-top ’80s neon aesthetic is consistently charming, the level-to-level gameplay is both rewarding and nail-bitingly intense, and there’s a good amount of ‘meta’ progress to be made beyond the limits of a single run. On the other hand, the RNG can be brutal in how it distributes power-ups between runs, and overall performance on the Switch (especially in handheld) leaves something to be desired. Even given these shortcomings, though, we’d give RAD a cautious recommendation. If you find yourself drawn to the likes of Dead Cells, Risk of Rain, Ironcast, or any other release in the massively popular roguelike genre, RAD could be right up your alley – assuming you can look past its annoying problems.