Originally released for PS Vita in Japan back in 2017, Gun Gun Pixies tells the story of two intergalactic hornballs, Kame Pon and Bee Tan, otherwise known as Pixie Team, who are sent to earth on a secret mission to observe the interactions of a bunch of teenage girls living in a dormitory. Pixie Team’s home planet Pandemo is in the midst of a great existential crisis, you see; society there has all but forgotten how to forge meaningful relationships and so it’s up to these two military school dropouts to spend half a year observing how earth girls relate to one another and build friendships in order to save the very future of Pandemonians.

Very generously billed as a third-person shooter, Gun Gun Pixies is, in reality, a simplistic and repetitive game aimed at people – and these people must exist because this game does – who enjoy roleplaying as tiny little sex pixies who sneak around dorm rooms on all-fours, exposing their asses and thongs at all times whilst they make heavy breathing noises and shoot “happy bullets” at the great big jiggling boobs and butts of teenage anime ladies. Ahem. 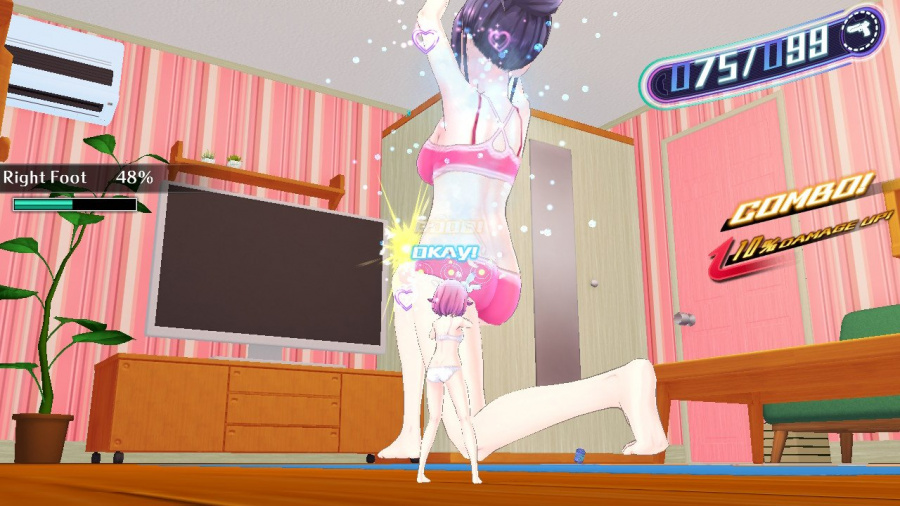 In order to collect the information vital to the survival of their home planet, Bee Tan – who is in a constant state of intense sexual arousal – and Kame Pon – who is bored with Bee Tan’s constant state of sexual arousal but is also herself somewhat sexually aroused – must climb around furniture in three different dorm rooms, using the scopes from their “happy guns” to search for hidden objects to further the “story” and take up sniping positions from which to fire off volleys of “happy bullets” at their target’s chests and crotches.

The gameplay here breaks down into some very shoddy platforming, where a misbehaving camera and poor jumping controls combine to ensure you’ll spend quite a lot of time trying to make it to points of interest around a room, and a lot of very tiresome, completely unchallenging shooting. You spend your entire time firing off endless barrages of bullets at big jiggly boobs and butts while trying to avoid large purple orbs, which emit from the target and represent her internal stresses – as well as fighting an army of tiny squids who wear condoms on their heads. Because of course they do.

One of the key elements as you conduct your research in a girl’s room is that you don’t get caught because – as we’re informed early on by gruff Pixie Team commander Almars – an intergalactic treaty has declared that alien races must not make themselves known to the inhabitants of planets they are visiting for fear of causing an absolute scene. Stealth is therefore thrown into the mix via a “Maiden Sensor” located at the top of your screen. The left-hand side of the sensor rises as you move around within a target’s cone of vision, whilst the right-hand side fills as you make too much noise. Filling either side up completely means you’ve been detected and the mission is failed. Missions can also be failed by getting hit too many times by purple orbs which, obviously, tear your clothes off bit by bit as they hit you until you are left entirely naked, which is absolutely not what people who want to play this game are interested in seeing happen. No sir. Nope. 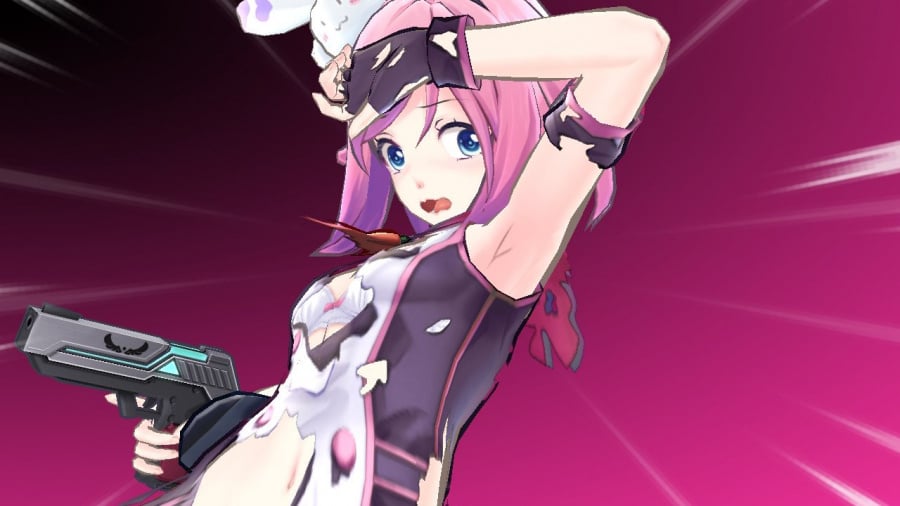 In order to combat being seen you can pull off a number of Pixie Poses, stuff like bending over with your ass out, rubbing your boobs together and pouting or squatting like you’re about to do a tiny space poo; the humans will then presumably assume you’re a toy figure and leave you alone. Minimising sound comes down to simply crawling around instead of walking, and this is a very important mechanic in Gun Gun Pixies because as you crawl around your tiny skirt will hitch itself up in such a way that your jiggling rear-end and thong are constantly on show.

As well as minimising sound and staying out of view of your target girl, you can also utilise a technique known as “Flinching Maiden”. Shooting a girl right in her big boobs or enormous butt will cause her to start flinching and she will temporarily be incapable of detecting you because she is so aroused; she is literally temporarily blinded by lust because you shot her so hard with your happy bullets right in her boobs. Congratulations, we think.

Once you’ve shot at a girl enough times and gathered enough mission information by scoping around for hidden objects in bins or cupboards, you’ll enter a sort of boss phase – or Pacification – where the target undresses a bit and will start doing yoga or maybe pole-dancing in her room, because, as we all know, that’s what girls do the minute you leave them on their own. Here, you need to focus fire on various parts of their bodies, causing them to become intensely aroused until they experience an enormous, and very noisy endorphin explosion, which is liable to have the police knocking your door down if you’ve got the TV volume up too loud. You’ll then be rewarded with a bonus bath stage where you get to watch a girl take a bath and can win Picoins, which are also strewn about all over rooms during levels, and use them to purchase upgrades or special equipment such as x-ray vision which enables you to see through people’s clothing at all times. 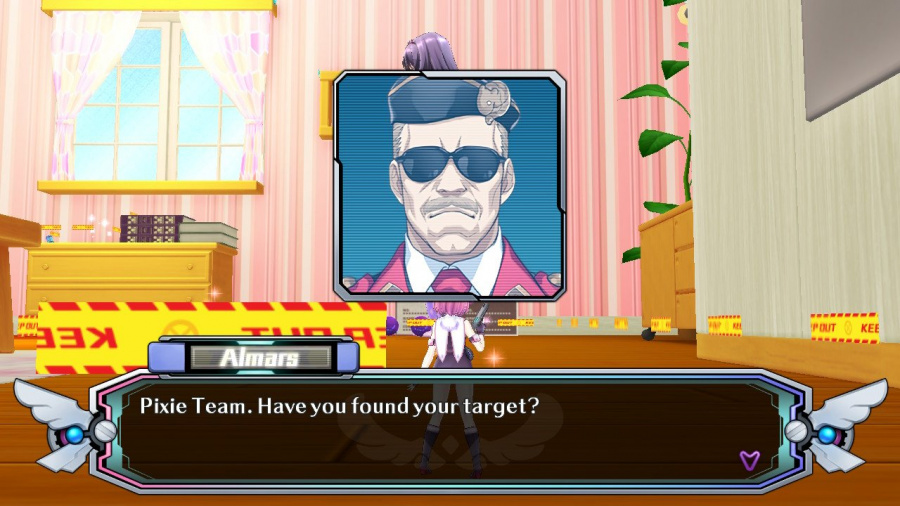 Indeed, moving into the Deck section of the game’s menu will allow you to upgrade various bits and pieces of your gear. You can also unlock lots of different underwear with your Picoins and we chose to grab a chocolate lingerie set, which was basically just splodges of chocolate covering delicate areas and not really something we would advise anyone try to wear as actual underwear. We also purchased another set called “Boing, Boing Happy Underwear” which we haven’t got around to trying on yet.

If all of this sounds like exactly the kind of thing you’re down for then you should know that cutscenes tend to be laboriously long and tedious affairs and you never get to leave Lilypad, the dorm you’re in, with all of the action taking place in three very similar and very bland bedrooms. Traversal is, as we mentioned, quite a bit of a pain due to clunky controls and the shooting just doesn’t have any sort of satisfying feel or challenge to it. In reality, once you’ve played about an hour of Gun Gun Pixies, you’ve experienced all the gameplay elements it has to offer, with only the tiresome story remaining to keep you involved – alongside all that unlockable underwear, of course. 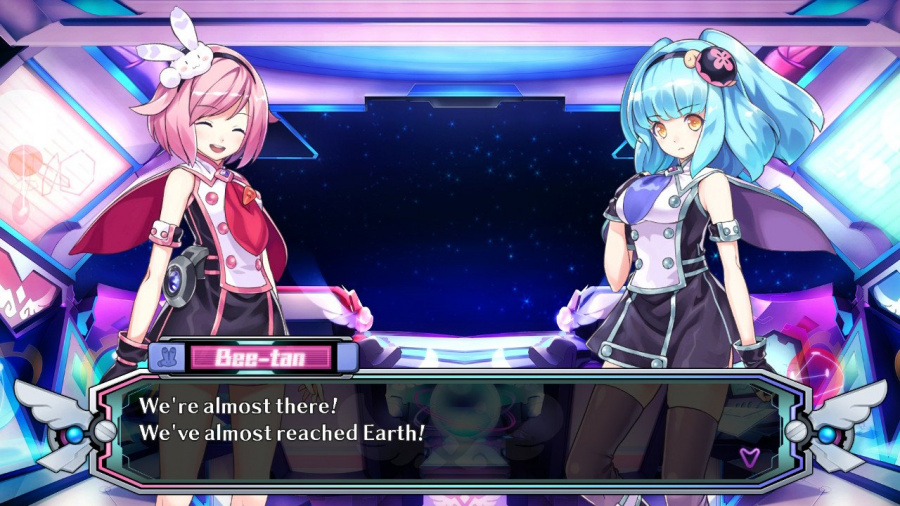 The plot also tries at points to strike a strangely caring, well-meaning tone in having missions revolve around things like one of the girls having an eating disorder and existing entirely on diet gum. The other girls in the dorm worry for her and she eventually overcomes her eating problem through the magic of happy bullets being blasted at her breasts. It’s a weird thing, trying to send some sort of message about not caring about your body image to the point of making yourself ill whilst at the same time existing solely to objectify bodies; it makes the whole thing even more of a colossal cringe-fest.

Gun Gun Pixies is a bad game. It’s a terrible third-person shooter, a clunky platformer and an incompetent visual novel, all wrapped up in an embarrassingly puerile attempt at titillation. Usually, this type of game can be saved somewhat by at least having some humour about itself or some level of self-awareness as to how bonkers or puerile it’s being, but Gun Gun Pixies can’t even manage that. It’s hard to believe anyone would choose to offend themselves with this kind of thing but, if it is your bag, you should still be put off somewhat by the fact that everything it attempts to do, on a purely technical level, it does very badly indeed.

How To Get the ScompLink – Star Wars: Jedi Fallen Order...