The terrain is cold and unyielding here, the horizon sprinkled with the snapped struts of an industrial era gone by, resentful reminders of what used to be but is unceremoniously no more. As you journey onward – because that’s all you do here; you just journey onward, forever rumbling towards the right of your screen – you’ll see them again and again, poking out of the ground like a shattered rib cage, the cool steel bones of a now-dead age reaching up to pierce an angry red sky.

FAR: Lone Sails is a game that is both nothing and everything; a delicious stew of disparate ideas that come together in a way that shouldn’t make sense, but somehow do. Part exploration, part platformer, puzzler, and resource management sim, FAR: Lone Sails almost defies description, and yet it is also indisputably one of the very best things we’ve had the pleasure of playing all year.

Whilst it’s already debuted on PC and console, this delightful puzzler is one of those games so incredibly well suited to Nintendo Switch that it’s a wonder it’s taken so long to get here. Just like genre stalwarts Limbo and Inside, this is a 2.5D side-scroller that tasks you with forever moving towards the right of your screen, your character a bright drop of scarlet scurrying through an otherwise monochrome world. And just like those games, FAR: Lone Sails, too, is a bare-bones tale that tells you nothing and everything, conveying its pleasure and panic through stunning visuals and sublime score alone. 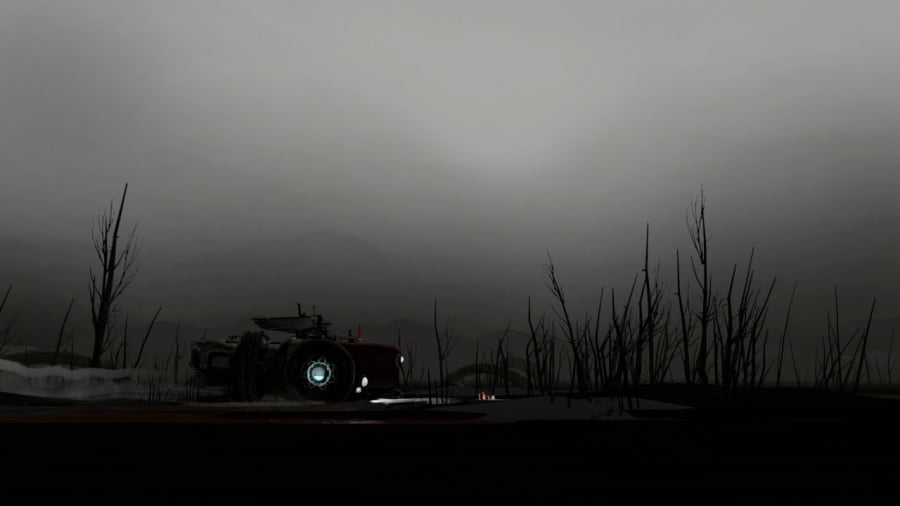 But where Inside and Limbo weave unsettling, dark tales, FAR: Lone Sails is an altogether more delicate, relaxed affair. You’re alone, but not lonely, accompanied by… well, we’re not sure, really. Part caravan, part truck, and part sailboat, this dilapidated vehicle is seemingly your only hope of getting away, and to keep the volatile machine running, you must collate as many items as possible – book stacks, abandoned luggage, children’s toys, balls, crates, oil drums, lanterns; whatever discarded gems you see littering the road ahead of you – to recycle into energy to fuel the hungry engine.

It’s occasionally a little hectic, especially as you get to grips with the fire hose and – eventually – welding torch, and there won’t be enough handy hooks around the place to keep your treasured trash in place, but it’s delightful; the process of exploring and gathering up the items discarded throughout the world and deciding what to sacrifice and what to keep, perhaps squirrelled away in your small, cosy sleeping quarters, never really loses its appeal.

There are no on-screen prompts. No tutorials or hints. Everything you do unravels organically through common sense and a healthy dollop of curiosity. You’ll slip easily into a cycle of painstaking vehicle maintenance, learning when to feed the fuel, push the accelerator, and vent the steam. We’ll admit it sounds a little humdrum on paper, but this repetitious loop is at once both mundane and marvellous, particularly as you watch your milometer tick away, quietly tracking the accomplishment of keeping this weird, wonderful machine running. 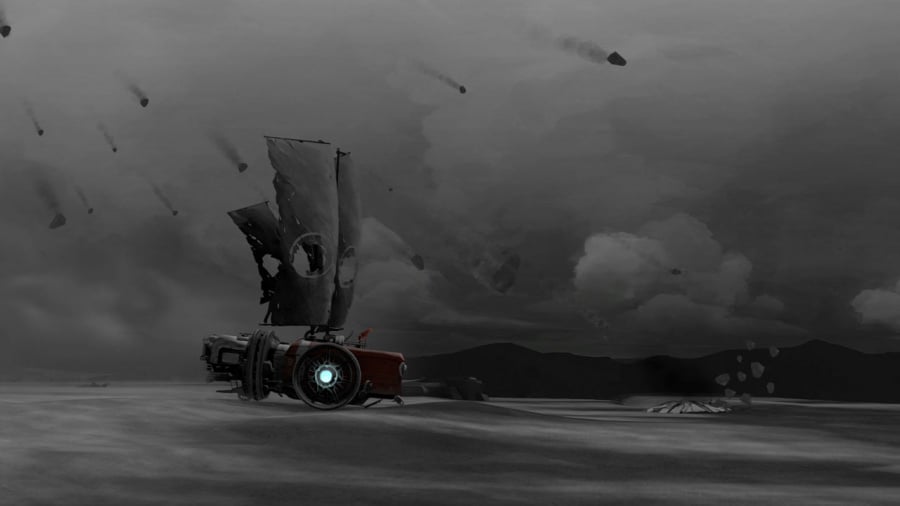 Later, once you grapple with some of the game’s gentle (if occasionally opaque) puzzling, you’ll happen across a vacuum which is oh-so-handy for sucking up those all-important fuel sources. Eventually, you’ll add a sail, too, which helps conserve energy (a tattered red flag will flutter inconspicuously when it’s time, so it’s worth monitoring the top-deck for an opportunity to shut down the engine and coast for a little while). The more time you spend with this strange contraption the better you’ll understand it, and the easier it becomes to monitor its quirks and mechanical meltdowns. Eventually, perhaps inevitably, it will feel every bit as much a part of you and your story as your small faceless, voiceless avatar.

Sandwiched between these busy sequences are periods of wondrous tranquillity, though, times when you’re gliding along on wind power alone as the sun rises, pushing away the darkness and enveloping you in preternatural peace. Occasionally, you must jump out of the vehicle to clear a path through the snapped steel and rusting remains. Sometimes, these forays have you traipse through forgotten factories and their obsolete offices, revealing snippets of a bygone time. But as gorgeous as these careful vignettes are, you’ll often itch to get back to your mobile home.

FAR: Lone Sails is not perfect. You can zoom out, and in, at will with ZL/ZR, but it’s a shame you can’t toggle the zoom on or off, especially if you’re platforming and need a close-up view of where you’re heading. An elevator helps you move between the different floors of your vehicle – there are four, including the top deck – but it’s cumbersome getting on and off the thing. Hooking and unhooking your trashy treasure can also be a little clumsy, particularly if you’re in a hurry (and there are times you definitely will be). 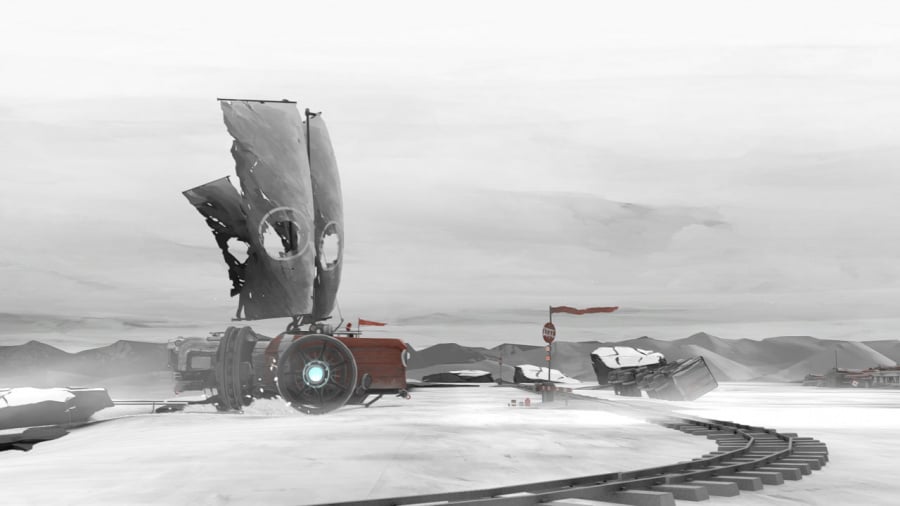 Having played this game initially on PC, we can report that most of these issues marred its original release too. It feels unnecessarily unwieldy to navigate the world with the Joy-Cons and the docked display wasn’t quite as crisp as the visuals on the console’s screen. If that all sounds a little bit nit-picky… well, that’s because it is. FAR: Lone Sails is such a thoughtful, carefully-crafted experience that squeezes so much into its brief 4-ish hour runtime, it feels churlish to complain about much else. That runtime may be too slender for some players, but we enjoyed every single minute.

Without saying a word, FAR: Lone Sails conveys a poignant tale of hope and perseverance, masterfully balancing style with substance for an experience that feels every bit as sublime as it looks. Sure, you could grumble about the shortness of the experience, the occasionally obtuse puzzles and the very, very minor control issues, but these problems dissolve away once you’re invested in the journey. We highly recommend that you give this a spin.

Is Sharp About To Challenge Nintendo With Its Own Portable Gaming...

The US Pokémon Center Store Has Introduced A