By now we all know the story of how Devil May Cry 2 was subject to a rather troubled and fast-tracked development. Hideki Kamiya, the director of the first game, was not involved and his replacement – whom, to this day, has remained unnamed – was dismissed deep into development, replaced by Hideaki Itsuno for the remaining few months before release. Itsuno may have tried his utmost best to salvage the mess he was handed but, in the end, this sequel is quite rightly seen as a pretty big misstep for the series, and the intervening sixteen years haven’t made it any better.

Starring a strangely mute Dante – his swagger and cockiness removed entirely and replaced by bored and sullen anger – Devil May Cry 2 is a series of bad decisions that is only made playable by the fact it retains the signature combat of the first game. There are a few other positives; the camera does a better job at framing proceedings than that of its predecessor (although it has lock-on problems that see many of your foes remain offscreen as you pelt them) and it still looks pretty good in places. You also get to play as new character Lucia, who joins Dante in the city of Vie de Marli on a quest to stop fat-cat businessman Arius from raising the demon Argosax and destroying the world. 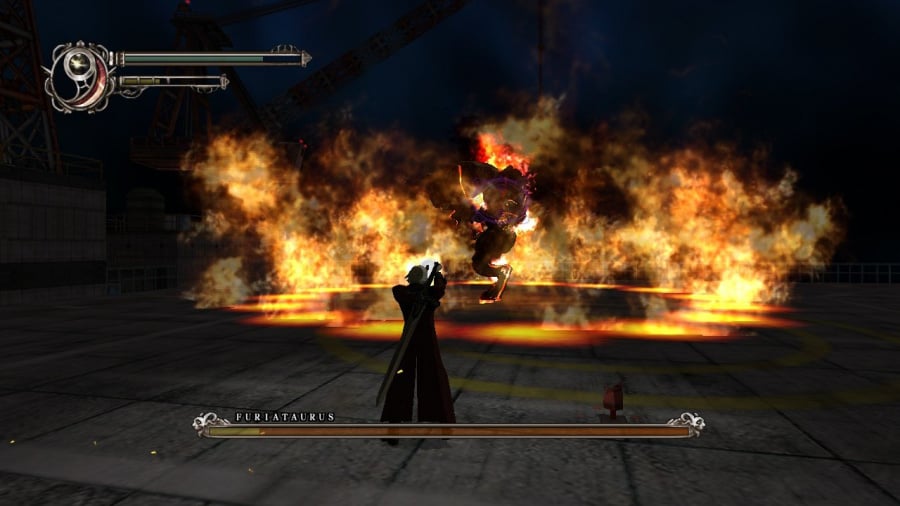 Playing through the game as Lucia sees the whole thing shortened by a bit; she’s missing a few missions and bosses from a Dante run, but she does have a few unique levels of her own and is, more importantly, crucial to seeing the entire story as well as unlocking a playable Trish (from the first game) and a handful of other difficulty levels. However, this is pretty much where the good stuff ends and, for much its running time, Devil May Cry 2 is a bit of a mess.

First off, it’s hard to overemphasise how terrible the enemies and bosses you encounter in this sequel are; they’re the very definition of cannon fodder and are happy to stand around – sometimes getting confused by scenery, sometimes not moving at all – as you hold down the Y button and shoot them until they are dead. You can use one of your swords if you like – that’s what Devil May Cry is all about, after all – but really, you can beat almost every enemy (including the bosses) by just blasting away with your pistols and very occasionally moving around a bit.

The poor enemy AI is exacerbated by lazy level design which varies between long, dreary corridors – there’s no magnificent Gothic setting here – and rooms full of demons who patiently stand about waiting for you to dice them up before some door or other unlocks and lets you proceed. Puzzles are simple to the point of being unnecessary and the bosses… well, let’s talk about the bosses. 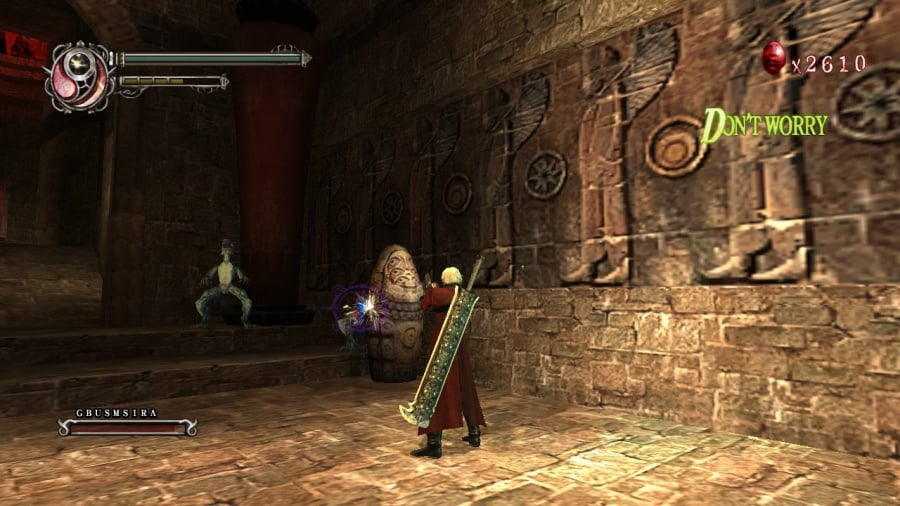 The first signs of trouble on this front occur in the third mission as you face off against a giant ape in a train station. There’s no explanation for this evil ape, but then again there’s no explanation for virtually anything in this game; all pretence of a narrative seemingly dropped after the opening FMV sequence. This ape is just there, raging and angry but also quite happy to uselessly fumble around the tiny area you are both locked in allowing you to hold down that Y button until he ultimately expires.

There’s a tentacled boss in stage four that almost requires you to think about what you’re doing, until you realise that getting right up against it and hacking away is an almost painless and risk-free route to success. This is then quickly followed by Dante facing off against Geri and Freki, two wolves who jump around the screen, never actually bothering to attack and leaving you to dispatch them however you see fit. There’s a trio of infested military tanks (we don’t know either) who are dealt with by simply standing under the barrel of their main gun and hacking away because they can’t hit you. You then segue straight into a turgid helicopter battle which turns into a frustrating stairwell climb where you struggle against camera angles to see where you’re headed as a fiery pit fills the screen below you. 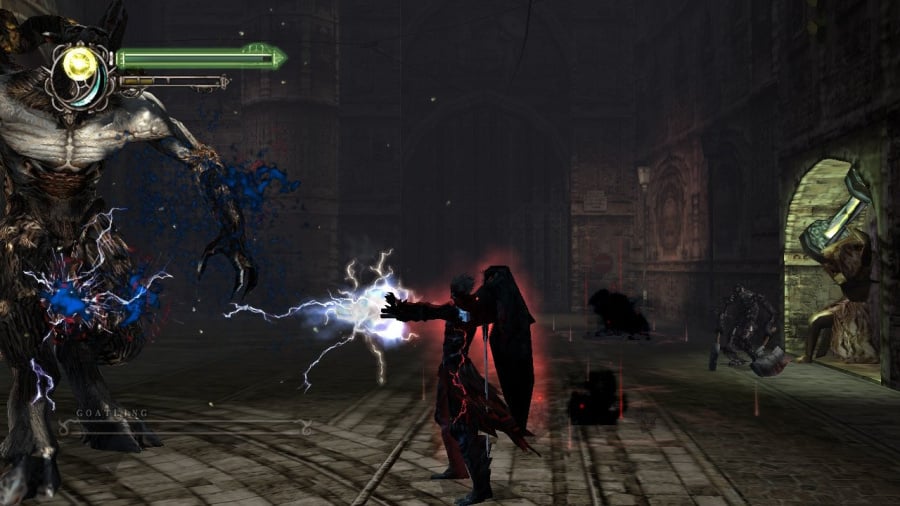 As far as boss battles go, the game continues in this vein right to the very end. None of them make a lick of sense, monstrosities appear out of nowhere for no reason (we particularly enjoyed the boss who morphs out of the side of a skyscraper) and it feels like at some point the developers decided the best thing to do with the mess they were in was fill the game with these huge, nonsensical setpieces and hope that players wouldn’t notice that everything in-between was a shambles. The simple switch puzzles, braindead enemies, boring urban environments, mute Dante… it’s just not very good.

Having said all of that, the combat that made the first Devil May Cry is still present and correct here – even if it is used against appalling enemies – and there’s a modicum of joy to be found in hacking away with your sword, jumping into the air and holding yourself there as you blast demons with bullets. Dante can do a fancy wall kick and flip now, which is absolutely useless in combat but a great way of grabbing some of the red orbs floating high around levels, and – if you switch your brain off entirely – you happily can blast through the entire thing in roughly five hours with very little resistance, just to say you did it. 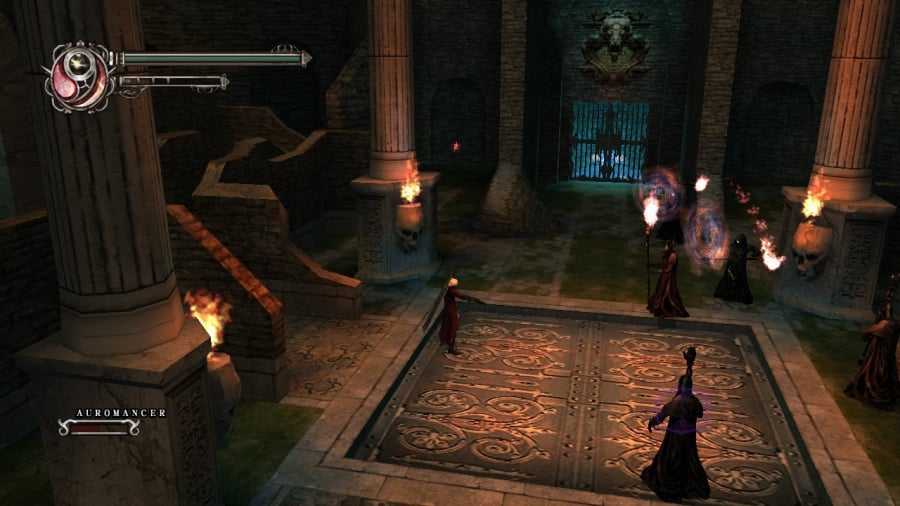 Playing on Switch in both docked and handheld modes everything runs nicely here, as you’d expect for a game from 2003. It still does look quite nice in places and, if you’re a massive fan of Devil May Cry who wants to play this low point in the series out of some sort of historical interest, it’s a game that suits the pick-up-and-play nature of Nintendo’s console, with levels tending not to hang around for much more than fifteen minutes a pop. But when the best thing you can say about the game is how brief its levels are, you know you’re scraping the bottom of the barrel.

Devil May Cry 2 is quite rightly regarded as a misstep for the now storied franchise; a confused and oddly bland game with a nonsensical story, boring level design, terrible enemy AI and a central protagonist who has seriously lost his mojo. There’s some fun to be had here and there by virtue of the fact it is a Devil May Cry game; that signature combat still intact, despite the fact it never really attempts to put your skills to the test. Still, there’s no escaping the reality that this is one entry in the series you can absolutely skip without feeling like you missed anything. Roll on Devil May Cry 3.

They Came From Below Brings Fresh New Content to We Happy...