Contra: Rogue Corps sets itself some seven years after the cataclysmic events of 1992’s Contra III: The Alien Wars, one of the very best entries in the franchise. It’s certainly a bold move to tie yourself so directly to such a beloved game; a sign of supreme confidence, you might think. Well, if it was confidence, it was sorely misplaced, because Contra: Rogue Corps is a missed opportunity and a mess. It’s bloated with unnecessary modes, has cumbersome combat, characters who spout terrible, cheesy dialogue (the city where the game is set is described as being like something that was “shot out of Lucifer’s asshole”) and, on Switch, it’s a blurred and muddy muddle of low resolution textures and pixelated edges on every surface.

The decision to make this new Contra a twin-stick shooter, whilst not necessarily what any fan would have wanted, could have been one that paid off. With its constantly shifting camera perspectives and tight little arenas that cordon you off and fire tons of enemies in your direction, there’s definitely the basis of something that could have been decent here. However, a combination of imprecise controls, boring level objectives and enemies that are thrown at you haphazardly see to it that the whole thing just never gets off the ground; it never finds that magic, addictive flow that the best in the genre possess in spades. 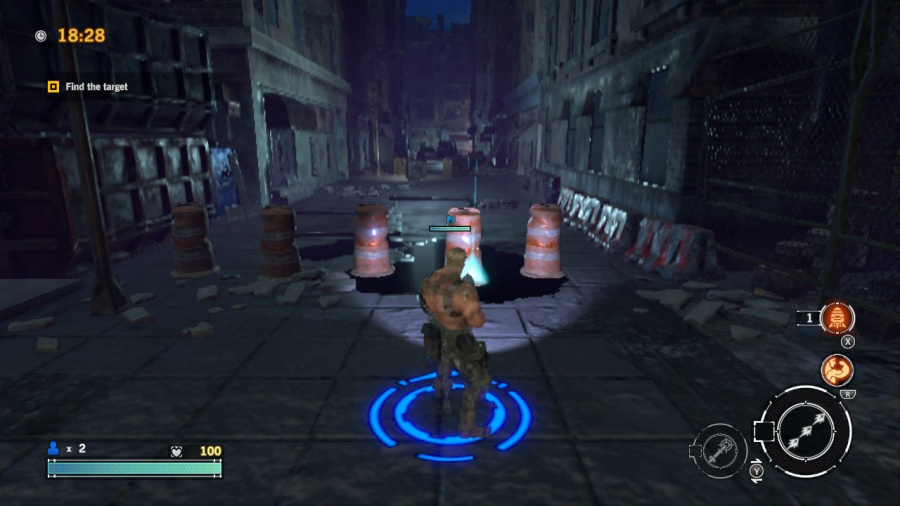 Aiming in a hectic twin-stick shooter needs to be refined and accurate, but the controls here just aren’t slick enough. Time after time you’ll find yourself struggling to hit the exact enemy, exploding barrel or vehicle you were aiming for. There are also platforming elements in every level that feel supremely awkward, getting you into all sorts of bother as you try (and fail) to reach some catwalk or other to deal with a grenade-lobbing mutant. It’s these very basic building blocks that aren’t up to task, ensuring that this is an experience that’s going to struggle to hold your attention for very long.

Missions play out, by and large, in very similar fashion and feature dull objectives. “Reach the end”, “find your target” or “destroy the enemy spawn points” – just incredibly bland stuff that makes no effort to get you involved in what’s going on. There are boss battles that vary between being too easy or just plain awkward, and the game randomly shifts to a behind-the-shoulder aiming mode that’s clumsy, inaccurate and an example of a developer throwing everything at their game instead of concentrating on making any of it in any way refined. Granted, the original Contra used a similar perspective-shifting tactic, but its application way back in the ‘80s was more convincing and assured than what’s attempted here. 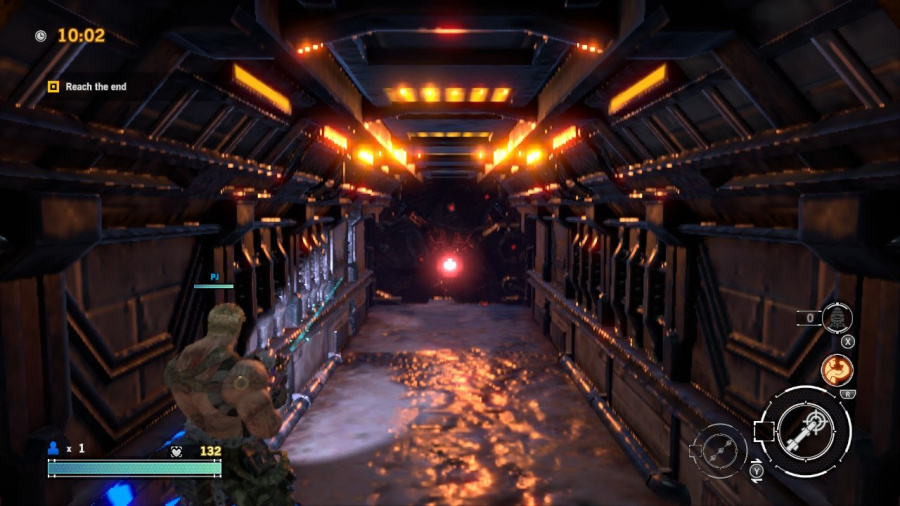 All of this stuff is then compounded by the fact that the Switch port is right up there with the most blurred and pixelated games we’ve encountered on the console; we’re talking SolSeraph-levels of eye strain. It looks much worse docked as the portable screen hides a multitude of sins, but in both modes it’s a pain to watch what’s unfolding on-screen. There’s also the small matter of campaign missions, which can run for a good 20 to 30 minutes, that are set against a timer and cannot be paused. Once you start a mission, you’re locked into completing it unless you choose to completely quit out – a crazy situation that doesn’t lend itself favourably to the portable nature of Switch.

In terms of positives, there are plenty of ways to play through Contra: Rogue Corps, with online co-op available for the full campaign and exploration missions. There’s a couch co-op mode that unlocks once you hit rank 2, although it only really consists of more exploration missions and a 4-on-4 PvP mode, which we unfortunately couldn’t get into a single game of at the time of writing.

There’s also an almost overwhelmingly deep upgrade and customisation system which is undoubtedly the strongest point of the entire package – which, let’s face it, isn’t exactly ideal when people just want to get on with shooting stuff. You’ll hoover up a ton of spare parts and materials during your sorties which can be used back at base camp to upgrade different aspects of your preferred weapons, and each gun comes with several slots to adjust firepower, cooling time and so on. You can buy new weapons and even have surgery to implant improvements into your chosen character’s body – gifting you better movement speed, defence or attack power, for example. If all of this had been tied to a genuinely good twin-stick shooter, Konami and Toylogic could have been onto a real winner, but it isn’t. 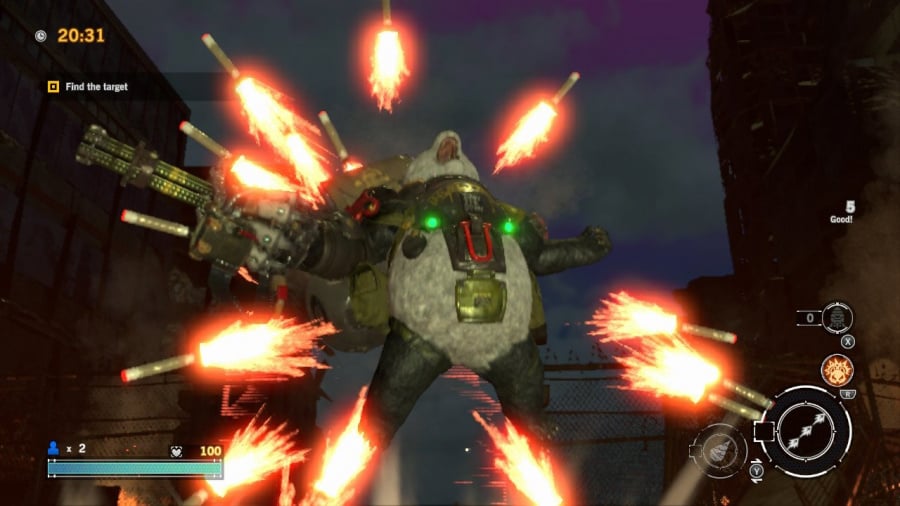 Speaking of characters, the four on offer here. Kaiser, Hungry Beast, Ms Harakiri and Gentleman are all nicely enough designed, but there just isn’t enough difference between their tactics on the ground to make it important which one you choose to main, beyond their aesthetics.They all have two weapons, an overcharge firing mode, special attack and a dodge that makes them temporarily invulnerable as they slice through enemies or avoid incoming fire, and it’s a shame there isn’t as much variety in how they play as there is in how they look. I mean, one of them is a panda, for crying out loud; surely that could have been leveraged into some kind of unique gameplay element?

There are occasions when things do come together in very short bursts, and mixing up your special moves, dodge and guns can be pretty fun here and there, but another decision – one that will be divisive and that we really feel ruins the flow of combat – is that your guns overheat, and they overheat quickly. This is perhaps meant to add a layer of strategy to proceedings, but it’s at the cost of constantly watching your weapon’s meter instead of concentrating on blasting the hell out of alien invaders. It just feels like one more thing bolted on in a haphazard way, leading to a game that’s clunky at the same time as being almost impossibly ugly on Nintendo’s console.

Contra: Rogue Corps has some good ideas. The twin-stick action could have worked if it hadn’t been so fussy and inaccurate, the choice of characters could have been great if they’d had a bit more variety and the deep customisation and online game modes could have added longevity if they hadn’t been attached to such a drab and messy-looking game. In the end, nothing about this endeavour feels in any way related to the Contra games you know and love, and you’d do much better to grab the Contra Anniversary Collection at a much lower price – or try out one of the many excellent retro twin-stick shooters or side-scrolling action games already available on the platform.

Face Your Fears in Anthem’s Season of Skulls – Xbox Wire

Strategic and Hardcore RPG For The King Lands on Xbox One...