And so we come to the end (for now) of Konami’s triple helping of retro compilations. After giving us an arcade collection that was heavy on the shooters and a Castlevania collection that celebrated the spooky series’ early days, the same treatment has now been given to the Contra series, which offers some of the finest run ‘n’ gun action in gaming history.

There are fewer games in Contra Anniversary Collection than in the others, despite Konami’s best efforts to disguise this on the menu by listing some games twice (as their different regional variations). What initially looks like 10 games, then, is actually only seven: still nothing to be sniffed at, but it’s one fewer than the other collections. It’s also technically only five when you consider that two of the games – Contra and Super Contra – are here in both arcade and NES form. 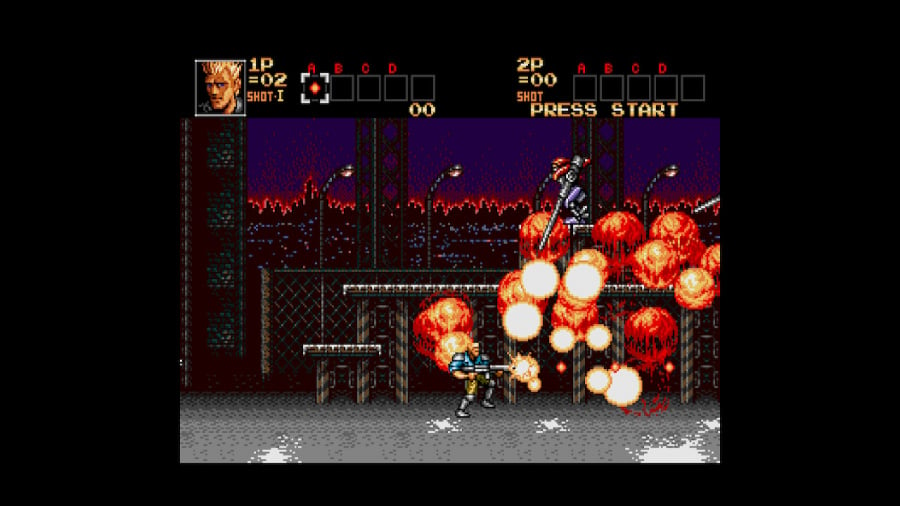 It’s also worth bearing in mind, though, that the Contra collection doesn’t have a single bad game in it, which we couldn’t say for the Castlevania collection (bow your heads in shame, Simon’s Quest and the first Game Boy adventure). Right from the start, kicking things off with the original arcade version of Contra, it’s clear that you’re dealing with quality here. That said, those used to the home versions will take a little time getting used to the arcade game because its aiming mechanism is very different: it can take time for your character to change the direction they’re shooting in, which can lead to some frustrating deaths until you adapt.

Following Contra is Super Contra, the arcade sequel that features similar gameplay in its side-scrolling sections, but ditches its predecessor’s third-person maze stages in favour of top-down shooting levels instead. It too has a slight delay when you turn and shoot, so if you struggle with the original arcade Contra it’s going to be the same here. It also doesn’t help that, unlike most other arcade games, Contra and Super Contra only let you continue a few times before both decide “nope, sorry, that’s Game Over now”: you can’t just brute force your way to the end with continues. 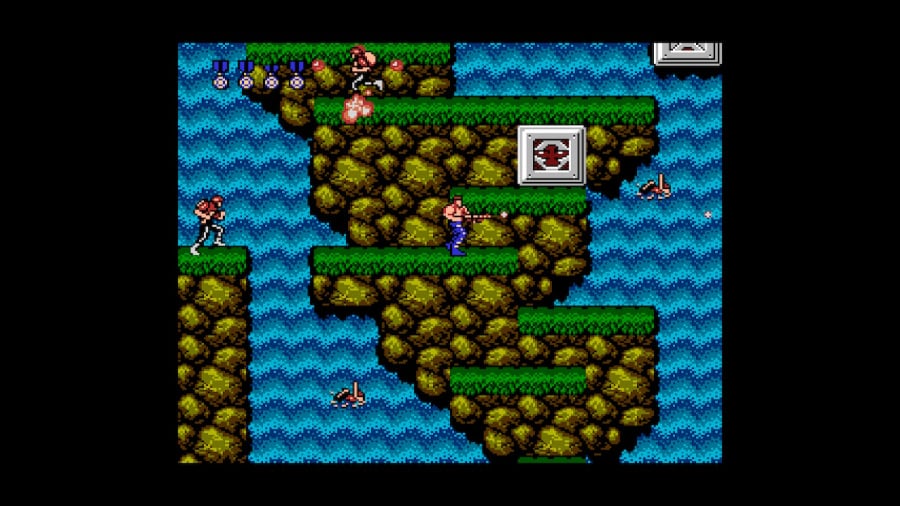 Those are the only two arcade games in the compilation: everything else is based on home releases. First and foremost of these is the NES version of Contra, among the most well-loved of the games here. It’s fair to say that a lot of NES games fail to stand the test of time but Contra remains enormously enjoyable more than 30 years after it launched, especially when you use the Konami code to give yourself 30 lives and make it a little less frustrating. Also included is the Japanese Famicom version, which adds extra cutscenes and is generally slightly better as a result.

The NES port of Super Contra, or Super C as it was known, is also included here. Whereas the Contra port is more or less a straight recreation of the arcade game, Super C adds a few new levels, tweaks some of the weapons and chucks in some new bosses, making it one of those rare examples in gaming of a home conversion being better than the arcade game it was based on.

As a nice touch, Konami has also included the lesser-known Game Boy title Operation C. This isn’t really a port of Contra or Super Contra: instead, it’s a completely original adventure that borrows elements of each. Many Game Boy adaptations of console titles left a lot to be desired, but Operation C is just as entertaining as the NES games that inspired it, and its inclusion here is far more welcome than the inclusion of Game Boy slog Castlevania: The Adventure was in the last compilation. It also has one of the best renditions of the Contra theme you’ll hear anywhere. 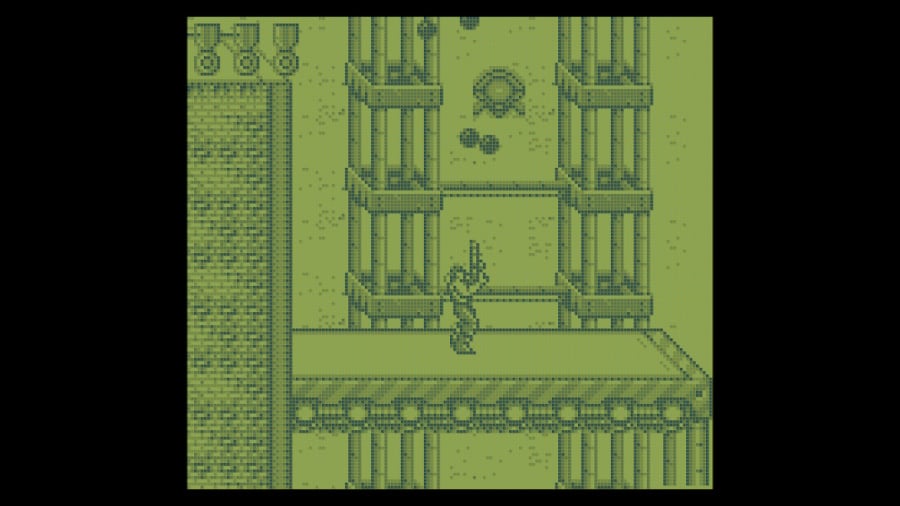 Jumping up to 16-bit, this package wouldn’t be complete without the legendary SNES game Contra III: The Alien Wars. Arguably the best of the games on offer, Contra III has some of the most memorable and screen-filling boss battles in gaming history, though it’ll take a lot of practice before you can reach them. Also included is the PAL version, Super Probotector, which replaced the heroes with robots. Conveniently, you’re given the option to play this version in its original 50Hz mode or a ‘turbo’ 60Hz mode (which just brings it up to the same speed as the American release).

Finally, there’s Genesis game Contra: Hard Corps and its European Mega Drive counterpart Probotector (which again ditches the soldiers in favour of cyborgs). Contra games are difficult at the best of times, but the extremely high-speed gameplay on offer here means you’re likely to see the Game Over screen within seconds the first few times you play it. Stick with it and it eventually becomes fun, but this is easily the least approachable of the games in this collection.

Much like the Castlevania offering, emulation in the Contra Anniversary Collection has been handled by the retro porting masters at M2 (of Sega Ages fame), so it should come as no surprise that everything runs flawlessly here. As before you have six different display options: standard 4:3, a pixel-perfect option (which makes the image look a little more square), a horrible-looking stretchy widescreen option, and then all three again with added scanlines. The Game Boy game, meanwhile, gives you the option to play in black-and-white, the classic yellow dot matrix style (easily our favourite) or through a Game Boy Color filter. 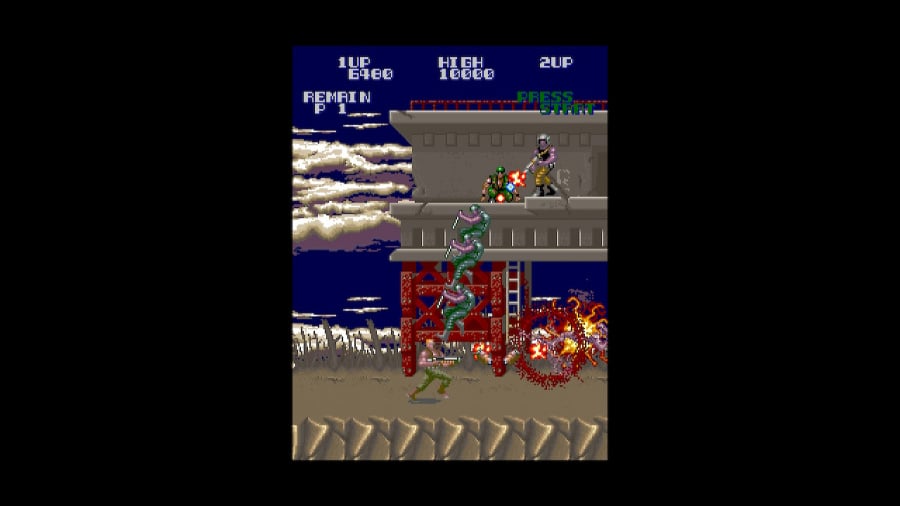 An extremely welcome addition is the option to toggle autofire for most of the games (except for the SNES and Mega Drive titles, which already technically include it as standard). This is entirely optional and we’re sure some purists will turn their noses up at the mere thought of turning it on, but it does make some boss fights far less painful on the old thumbs. Just remember to turn it off when you’re trying to put in the Konami code in Contra, otherwise it’ll count the B button more than once and you’ll wonder (like we did) why it isn’t working.

Speaking of the Konami code, the only real disappointment here – for now, at least – is the lack of ability to play the Japanese versions of anything other than the NES Contra. Konami has already stated that they’re coming in a free update: while it isn’t a dealbreaker by any means, most of the cheat codes that give extra lives are only present in the Japanese versions of each game. Contra is a difficult series in general and while long-time fans don’t necessarily need cheat codes the ability to play Contra III with 30 lives or the exceptionally tricky Contra: Hard Corps with 70 lives could make it a lot easier for newcomers to dip their toes into the series without completely drowning in a sea of bullets. 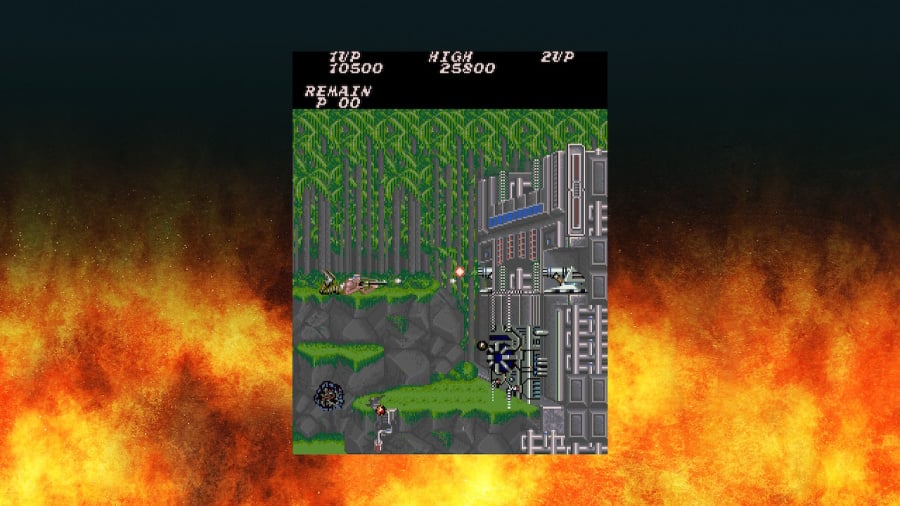 Go into it with the full knowledge that we’re dealing with a selection of difficult games here, however, and you’re in for an absolute treat. Every single game on offer here is a cracker – though Hard Corps may be a little too much for some – and the now token ‘bonus book’ (which is better than those in previous Anniversary Collections) does a great job of tying the whole thing together for retro fans.

While it’s a shame that there are fewer games here than in other Konami collections – we’d have loved to have seen NES title Contra Force or the now-extinct WiiWare title Contra ReBirth – the ones included are universally brilliant. The 8-bit and 16-bit Contra games are among the finest examples of the run ‘n gun genre, and to have almost all of them included in a single release and emulated flawlessly is an absolute treat. Whether you’re a fan of the series or a curious onlooker who’s always wanted to see what the fuss was all about, this is essential.

Video: The Animal Crossing Clone You