Four years ago, the 3DS and Wii U were graced with a JRPG from Eden Industries called Citizens of Earth, which emulated the offbeat style of Nintendo’s cult-classic EarthBound to wonderful effect. Still, it was a bit of an uneven experience at times, with a series of niggling little issues that a sequel would likely rectify, and now we’ve been fortunate enough to receive that sequel in the form of Citizens of Space. Rather surprisingly, this new release eschews the EarthBound trappings in favour of another popular Nintendo RPG franchise, and while it still hasn’t outgrown all the little missteps of its predecessor, Citizens of Space proves to be a massively satisfying experience. 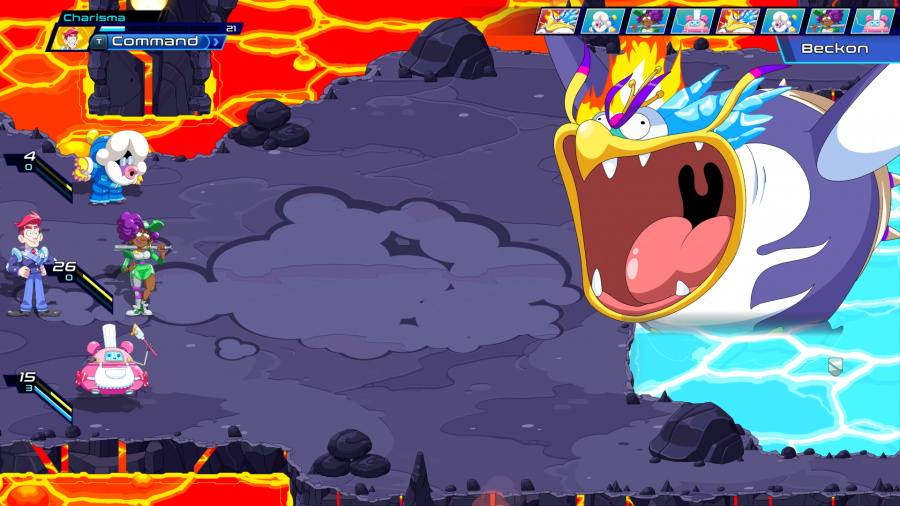 The story kicks off with you assuming the role of the Ambassador of Earth, a naïve and frustratingly optimistic man who’s comically narcissistic. After being invited into the Galactic Federation, our hero goes to give a speech to our new alien allies only to realize that the Earth itself has somehow gone missing. Realizing that he can’t be an ambassador if he has no planet to be “ambassing”, he then sets out on a journey across the stars to uncover where the Earth has gone and return it to its rightful place.

Although the story isn’t exactly riveting, it’s made compelling in large part due to the stellar cast of larger-than-life characters that populate all the planets you visit. Voice acting is consistently excellent through the incredibly diverse and hammy performances, and it goes a long way towards making each of these characters memorable in their own way. Through it all, there’s a sort of Saturday morning cartoon kind of humour at play, with plenty of pop culture references and fourth-wall-breaking moments keeping the tone lighthearted. We especially appreciated the back-and-forth that often arises between the Ambassador and his assistant (named “Assistant” by default), who acts as the straight man and voice of reason to the often overly idealistic musings of his superior. Those of you looking for an in-depth JRPG narrative packed full of complex relationships and thought-provoking moments won’t find a whole lot to love here, but the silly and irreverent tone packs Citizens of Space with loads of charm. 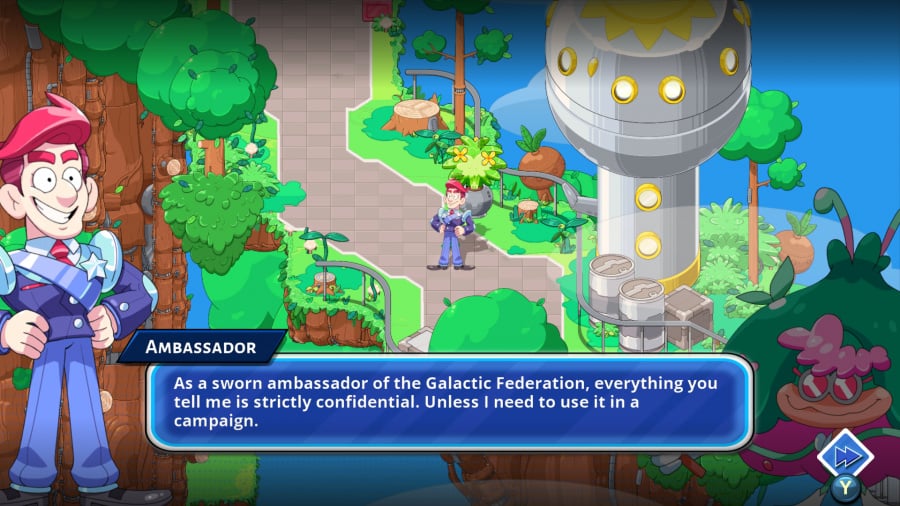 Though your primary objective in Citizens of Space is to find the Earth, that goal arguably becomes sidelined a few hours in as the real focus comes into play: your party members. Nearly every NPC with more than a few lines of dialogue can be recruited to join your party, but each of them will first issue you a quest to complete in the meantime. This can be as simple as a fetch quest or as complex as a multi-step treasure hunt, and while nothing here gets overly complicated in the bigger picture, we still appreciated and were sometimes surprised by the amount of diversity in the quests being offered. There’s an almost Pokémon-like quality to collecting all the party members and completely filling out your roster, and it keeps you motivated to run to just about every corner of the universe and plumb the depths of planets that you otherwise may not have had much reason to spend much time with.

This does, however, raise one of our biggest complaints with Citizens of Space, which is the rather poor setup of the map. To its credit, Citizens of Space has fixed some of the navigational issues of its predecessor – namely by offering you a compass that will point you towards where you need to go next – but it has also created some new issues in the wake of this. The problem is that the map itself isn’t very good at making it clear which quest objectives can be reached, and from where. We found ourselves a few too many times at a point that the map told us would lead to a quest objective, only to be faced with a dead end. 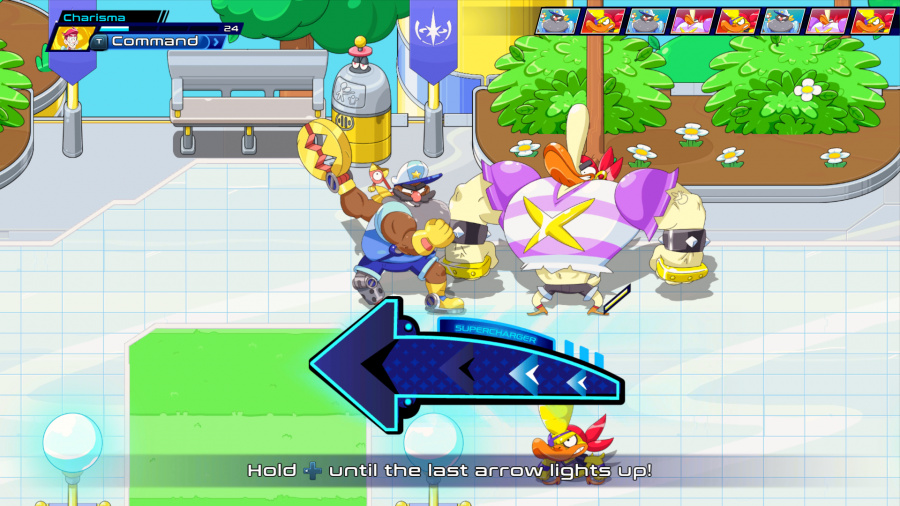 Poking and prodding around is sure to eventually lead to answers, but given the maze-like design of most planets and the lack of fast travel, it can often become tedious to have to constantly be walking around in search of a way forward when the map has failed you. This issue is only further exacerbated by the prevalence of loading screens. Every time you enter or exit a building or walk from one area to a next, you’re faced with a loading screen that takes about ten seconds to pass. In isolation, ten seconds isn’t bad at all, but Citizens of Space finds a way to cram tons of these screens throughout a typical planet, enough to the point that it does negatively affect the experience. It’s not deal-breaking, but just be sure you’re coming into this one with a patient mindset, as the loading screens and hit-or-miss navigation are sure to pad out your experience and make it much longer than it could be.

When in combat, you’ll quickly see that the EarthBound trappings of the last game have been tossed out in favour of a style that apes the combat system of the Paper Mario or Mario & Luigi games; a move that we feel has worked enormously to the game’s benefit. Battles are still turn-based affairs, with the order of the next several turns being shown in the corner, and your actions are all governed by a simple energy system in which some attacks will either add or subtract from that character’s energy. Things are made a bit more interesting with the mini-games, however, in which well-timed button presses will cause your attacks to do more damage or cause enemy attacks to do less. These are simple enough affairs, often just asking you to have reasonably quick reaction times, but they keep you engaged in the moment-to-moment action of battle in a way that few other JRPGs can manage. 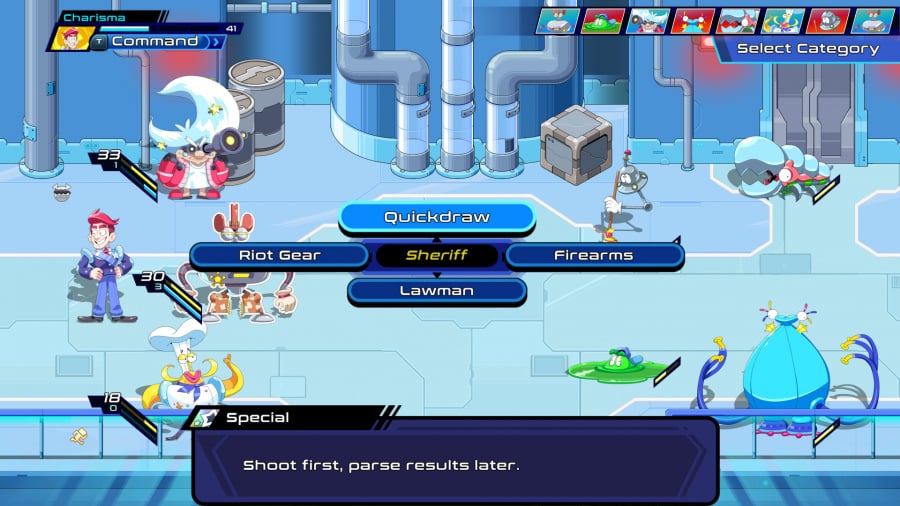 Combat is seldom difficult, especially given how easy it is to power-level characters and hugely buff up their stats while unlocking powerful new skills, but the mini-games provide just the right amount of player input to make even common battles against fodder enemies interesting. A nice feature, too, is the ability to ‘chain’ together enemy encounters in exchange for an experience bonus. Upon completing a battle, you can choose to take on a few more waves of enemies, and if you manage to clear them, you can then rest on your laurels or you can take on even more waves of enemies for more experience. It’s a nice risk/reward system that challenges you to push your team to its limit, and while the overall easy difficulty seldom necessitates that you make heavy usage of this feature, it’s still nice to take advantage of every now and then.

You can have up to three party members on the frontlines at once, while the Ambassador (a true politician) cowers behind them and only gets involved if an item or summon needs to be used. See, not all party members you recruit are usable as active battle participants. Some of them are usable on the overworld, in which you can use special abilities like fishing or breaking rocks, and some of them are usable in battle as rare summons that can hugely shift the balance of a tough fight. Many can also be equipped to active party members as a sort of support item, granting the active members boosted stats and extra moves. 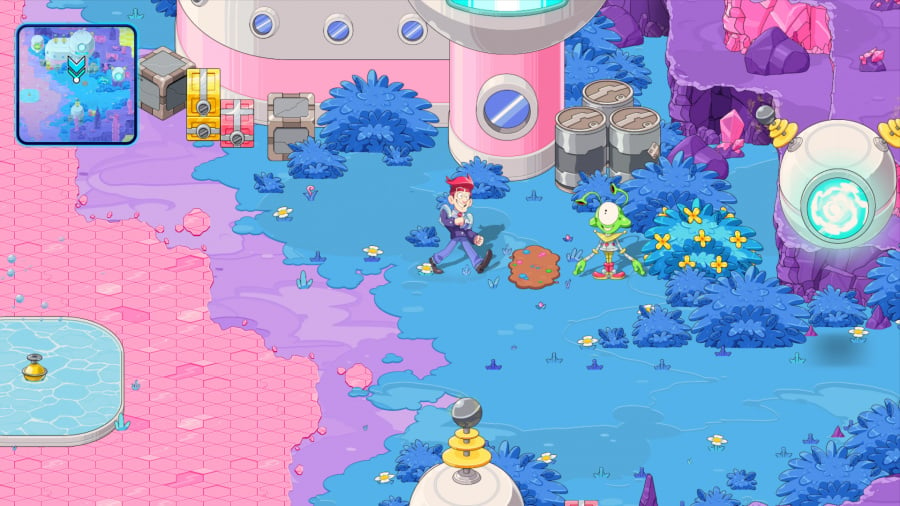 Each party member has a passive “Talent” as well, each of which can have interesting effects, such as the ability to adjust the random encounter rate or to change up the in-game music. These Talents can then be upgraded through passive usage, such as letting you set the encounter rates to absurd levels or allowing a certain character to break heavier rocks and create new pathways. It’s not a terribly deep system, to be honest, but it seems a lot more sprawling due to the wide cast of characters you can be upgrading at any given point of time, and we appreciate the gameplay diversity that this offers.

From a presentation standpoint, Citizens of Space manages to satisfy; the art style and music make it clear that Eden Industries is a little more confident this time around. Characters are defined by their bulbous features and often wacky designs, but all of it comes together to make for a cohesive and eye-catching art style that’s easy on the eyes. Our only complaint is that the imaginative and colourful look of the worlds isn’t always matched by the animation, which often comes off as being subpar. It’s not terrible by any means, but it feels unfinished in many ways, with characters and enemies often coming off as being overly stilted and stiff in how they move. You grow used to it over time, but we would’ve liked to have seen a little more attention paid to this, especially in how it would’ve given the already enjoyable battles that extra ‘oomph’ to give them some real visual flair.

As of the time of writing, it’s unknown when Nintendo is going to get around to releasing a new Mario RPG in either of the franchises that it’s been developing over the last several years. In the meantime, Citizens of Space proves itself to be an excellent title to scratch that particular itch and fill the gap while we wait, offering up a humorous RPG experience with a memorable cast of colourful characters and an extremely fun battle system that rewards both tenacious dexterity and careful planning. It may be frustrating in terms of navigating the map and overworld, but the diverse and plentiful sidequests help to make any moments of irritation bearable. We’d give this a recommendation to any fans of the Mario RPG series’ – as this hits most of the same notes – or anybody looking for a good RPG to introduce them to the genre. Citizens of Space is a measured step up over its predecessor, and we hope that Eden Industries will continue this upward momentum with whatever project is coming up next.

Discover the Dark Heart of Skyrim in The Elder Scrolls Online:...

Nintendo Switch eShop Down Following Release of Joker and Version 3.0...