There’s absolutely no shortage of excellent retro-pixel style roguelikes and rogue-lites on Switch, with the likes of Enter the Gungeon, The Binding of Isaac, Crypt of the Necrodancer and Dead Cells being just a few of those that stand out as must-plays on Nintendo’s console. Dead Mage’s Children of Morta makes a valiant attempt to join this exclusive list of titles with a truly gorgeous pixel art-style, addictive combat and unique family-driven set-up that sees you take control of various members of the Bergson clan as they attempt to stem the tide of an evil corruption that’s spread across the land from the summit of Mount Morta.

For the most part, Children of Morta’s family set-up works pretty well; it does stumble a little to begin with as you only have access to a few characters who aren’t the strongest of the bunch – we’re looking at you, John – and you’ll need to grind early dungeons in order to unlock others, but once things get going there’s a lot to enjoy here, even if the narrative is a little simplistic and the whole thing is over a bit quicker than we might have expected. 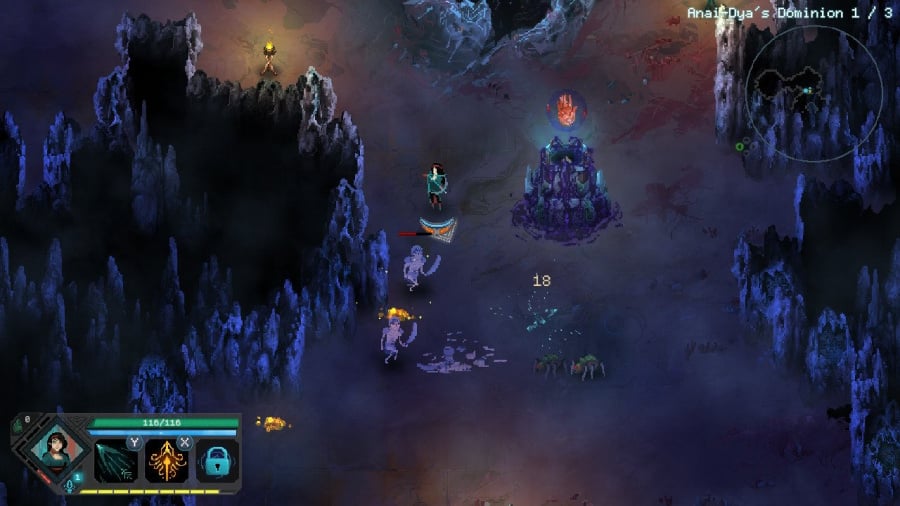 The general flow of gameplay consists of taking one of the six playable members of the Bergson family down into the multi-level dungeons below their home to fight your way to a boss battle and unlock a gateway to the next area, hoovering up Morv – the local currency – and grabbing various upgrades and boons strewn about the procedurally-generated levels as you go. You’ll then return home, whether you’ve been successful or not, watch a little more of the story unfold and spend some time unlocking upgrades and perks.

There really are an absolute ton of power-ups, skills and upgrades to get your hands on in this game, and it’s the sheer volume of these that is perhaps Children of Morta’s biggest strength. There are so many moving parts here and, somehow, Dead Mage has managed to ensure that, no matter how you decide to play, which character you concentrate on upgrading and what RNG luck spits out at you on any given dungeon run, there’s always a nicely addictive synergy in how the various perks and boons stack up to help you on your journey.

There are persistent unlockable skills you can purchase between missions that are shared across the entire cast of characters – stuff such as permanent armour upgrades, speed, critical hit damage and strength power-ups. There’s the Book of Rea, which – amongst other things – gives you access to obelisks adorned with boons such as shields, temporary invulnerability, regenerating health and a lot more besides. You’ve got divine graces – stackable perks that are scattered throughout levels – as well as relics and charms which add the likes of electrical shields, enemy leeching vortexes, totems that distract your foes, cloaks, rings of regeneration, fire damage… it goes on and on and it all comes together beautifully to ensure that no two runs ever feel the same. 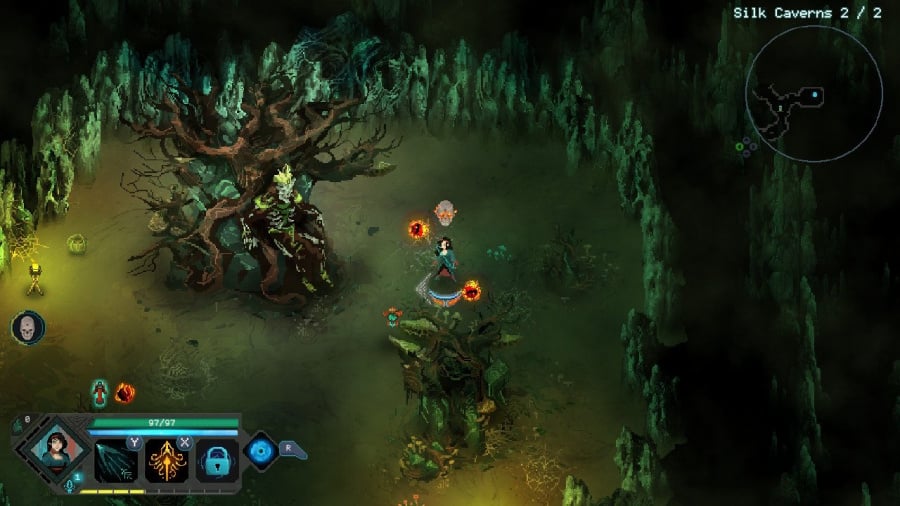 Sometimes power-ups will be hidden in treasure chests, other times you’ll be forced to partake in a little memory game miniboss – or even a round of pong against a corrupted computer – in order to get your hands on some boon or other. There are a ton of goodies here and, when added to the differing move sets, unlockable skills and playstyles of the six characters on offer, it gives Children of Morta a real sense of variety that keeps the inherently repetitive grinding from feeling stale.

Whether or not you manage to succeed in a dungeon – and you’ll certainly fail plenty of times early on – the Bergson’s story will continue to progress every time you return home. It’s a novel idea, but it’s also kind of a strange set-up; on one hand, it helps make failure feel less punitive as the narrative keeps moving forward and you’ll always be able to level-up or unlock something after a run. However, on the other hand, it feels odd when all you want to do is jump straight back down a dungeon to try again but are impeded by a story that keeps on trucking, no matter how you’re performing, stopping you from returning to fighting at once as it throws up another little family drama, doles out a side-quest or pauses to give some bit of backstory or other. 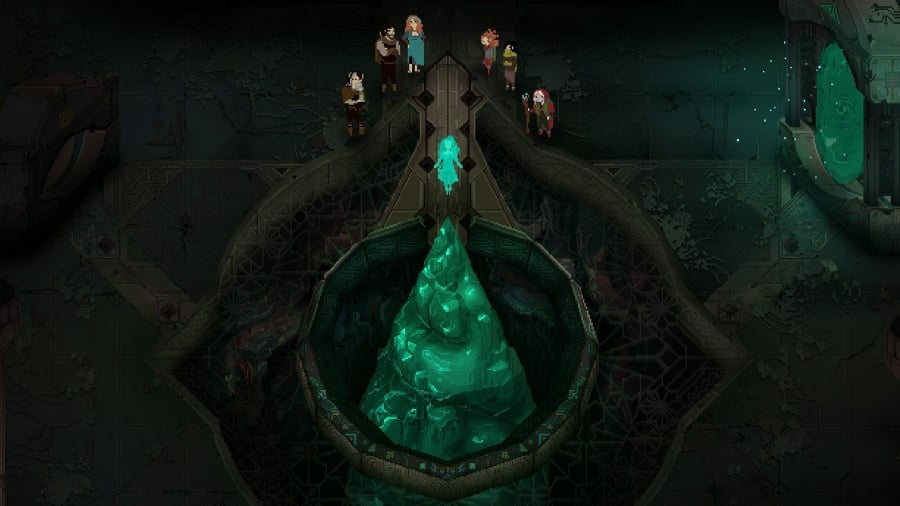 Another slight weakness in terms of how the story is delivered is in its narration. Told through a single narrator’s voice rather than have the whole family perform dialogue, it tends to be a little OTT and rather hammy, attempting to make grandiose this story which sets itself up as being deep and meaningful but is, in fact, pretty basic, run-of-the-mill video game material; there’s an evil corruption, you must stop it, the end. It’s not that the Bergson’s story is bad – it adds some nice background to the dungeon-crawling action – it’s just not nearly as clever, complex or emotionally-involving as the narrative stylings like to suggest.

But to focus on these small negatives too much would be doing a disservice to all the things that Children of Morta gets right. Once you get over its rather laborious opening hour, try out a few family members until you find one who suits your playstyle (we fell for Linda’s zippy ranged combat and Kevin’s brutally efficient two-handed dagger attacks and cloaking ability) and unlock a few of those persistent family upgrades, the time you spend in the dungeons below the Bergson’s beautiful home becomes pretty addictive and absorbing stuff. Combat has a nice, Diablo-esque feel to it (although there is absolutely zero loot to grab here) controls feels responsive, enemies come apart in a satisfying manner under the force of your attacks, and the whole thing performs flawlessly in both docked and handheld modes on Switch. 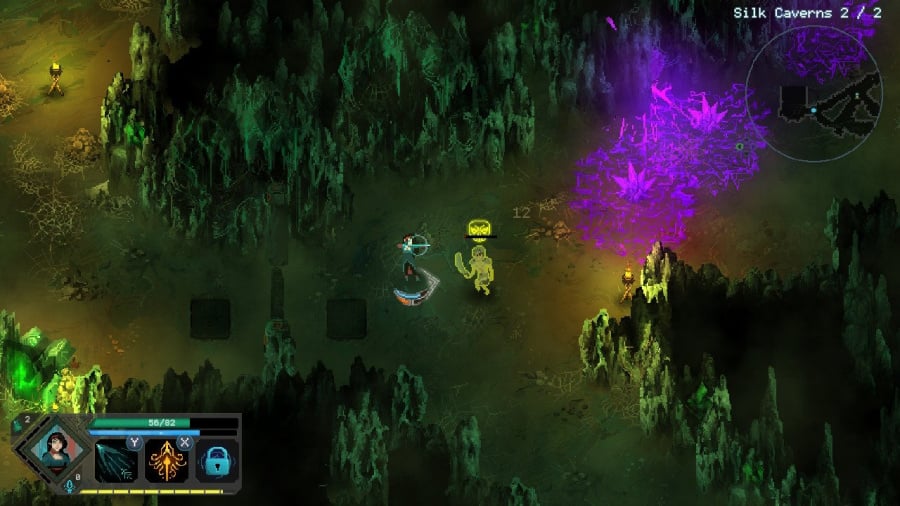 For a rogue-lite, it’s satisfyingly strategic, too. Enemies are tough enough from the get-go that you’ll need to think about what you’re doing and which upgrades you choose to activate at any given time as you make your way through an area. As an example, we found ourselves leaving some of the obelisk offerings until we really needed them, keeping a mental note of where they were until just before we headed into a boss fight, then backtracking to grab them and give ourselves a better chance of succeeding. There’s a nice amount of strategy involved and, even though enemies are quite bland and really don’t change much over the course of the game, they’re tough enough to keep you on your toes and encourage some experimentation with characters and skills.

The graphics are also excellent across the board; everything is lovingly crafted and detailed, and there are more than a few hints of Hyper Light Drifter here – in the characters and isometric level design, in the way nature tends to pulsate with mysterious neon light, and in the rolls and thrusts of the Bergsons in combat. Developer Dead Mage has also factored local co-op into the equation, and it works rather well for the most part. Sometimes faster characters do feel a little hampered as you need to stick quite closely together to move through areas, but overall playing as two feels good here and blasting your way through hordes of goblins, bats and ogres with a pal is always a good time. 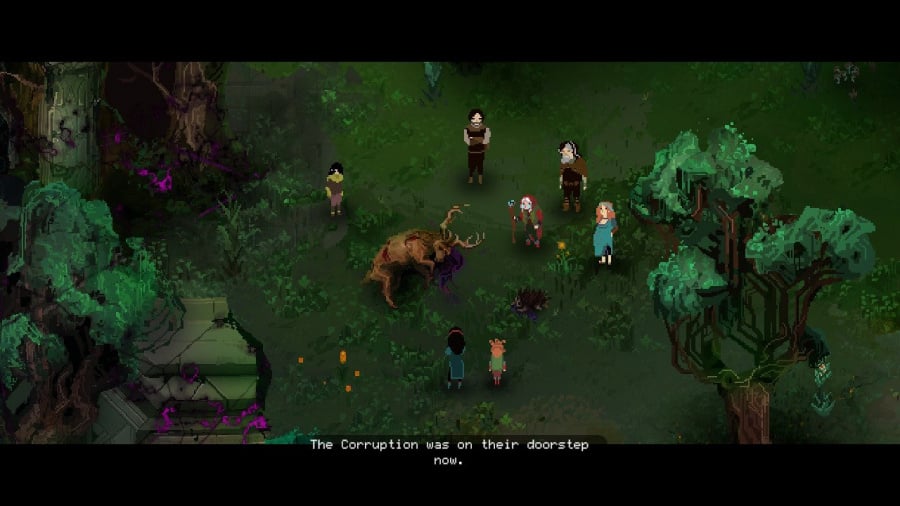 Dungeon runs also feel well suited to the Switch; coming in at around the twenty-minute mark, they’re perfect for a blast in portable mode and, as we mentioned, you always come away from a run with something to show for it – whether it be furthering the narrative slightly or unlocking some upgrade or other, Children of Morta never leaves you empty-handed, which suits quick dips here and there perfectly.

Children of Morta carves out a nice little space for itself in the rogue-lite genre. It’s a beautiful-looking game that’s obviously had a lot of love and care poured into it. Its dungeons, although perhaps not the strongest in terms of variety of enemies, are certainly refreshingly challenging, and all of the upgrade systems, pickups and playable characters on offer ensure there’s plenty here to keep things feeling fresh over the fifteen-to-twenty hours it will take you to see things through to the end. It may not quite hit the highs of the likes of Hyper Light Drifter or Dead Cells, but it’s not far off and its zippy dungeon runs and slices of family drama feel like a perfect fit for Nintendo’s portable console. If you’re a fan of the genre this is certainly an addition to the Switch’s library that’s well worth checking out.

Heart Pieces – The Legend of Zelda: A Link to the...