TECHMONEYFIT.COM
More
Home Technology Gaming Review: Bubsy: Paws On Fire! – How Many Lives Does This Bobcat...

“Bubsy’s back!” While that phrase might strike fear into your very soul, there must be a fair amount of readers with at least a residue of affection for the orange bobcat. Bubsy the Bobcat hails from the age of mascot platformers that has come back into vogue with the current wave of ’90s nostalgia, and he somehow remains in the collective consciousness when arguably more deserving characters like Glover and Sparkster have fallen by the wayside. Despite appearing in games that should have ended his career, Bubsy’s apparently using every one of his nine lives to claw his way back into the limelight.

His latest outing isn’t a 3D platformer, though. Bubsy: Paws On Fire! is an auto-runner, a platforming variant that feels like the best possible venue for Bubsy in 2019. We won’t beat about the bush – it isn’t brilliant by any means – but given the pedigree of the developer and the low expectations set by the main character, it’s not bad either, and comfortably ranks in the upper echelons of the bobcat’s back catalogue. 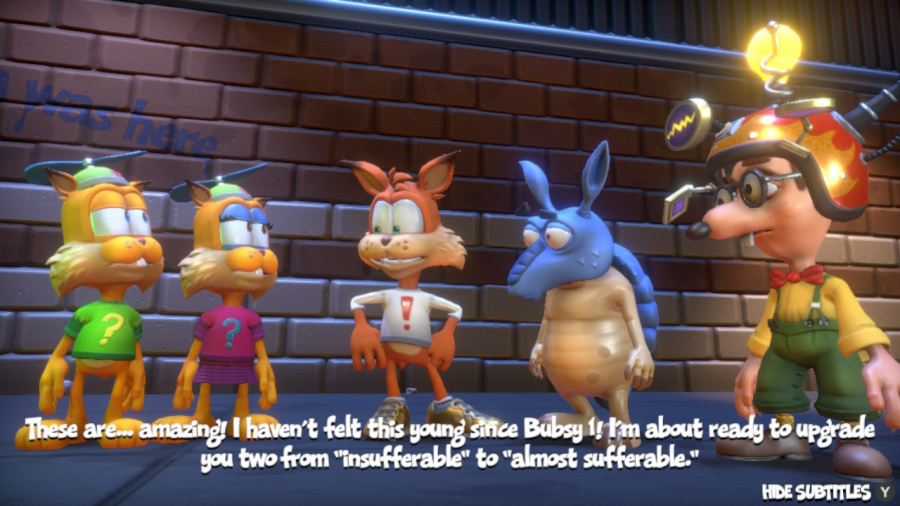 Faint praise aside, a crash to the Switch’s main menu after watching the opening movie wasn’t the best of omens, but we didn’t encounter any crashes after that. Story-wise, Bubsy’s nemesis Oinker is kidnapping animals for a grand zoo of some sort, so it’s up to Bubsy to run through levels collecting yarn balls to fight the fiend and save the day. Joining him is Virgil Reality, a vole with a high-tech helmet and the Woolies, traditionally the series’ alien enemies but here united with Bubsy against the big bad.

The story is restricted to opening and ending movies with one-liners introducing each level and dialogue kept to snarky quips when you die. For our money, Bubsy: Paws On Fire offers just about the right amount of Bubsy without becoming irritating. Of course, the more times you die the more times you’ll hear his bon mots, so there’s some incentive to ‘git gud’.

After selecting one of three initial characters, you’ll immediately get some strong Runner3 vibes from your first run, with good reason: Bubsy: Paws On Fire! comes from Choice Provisions, the same studio responsible for the BIT.TRIP series. Consequently, there’s a solid foundation and gameplay ‘flow’ here which you’ll recognise if you’ve ever played a game in that series. 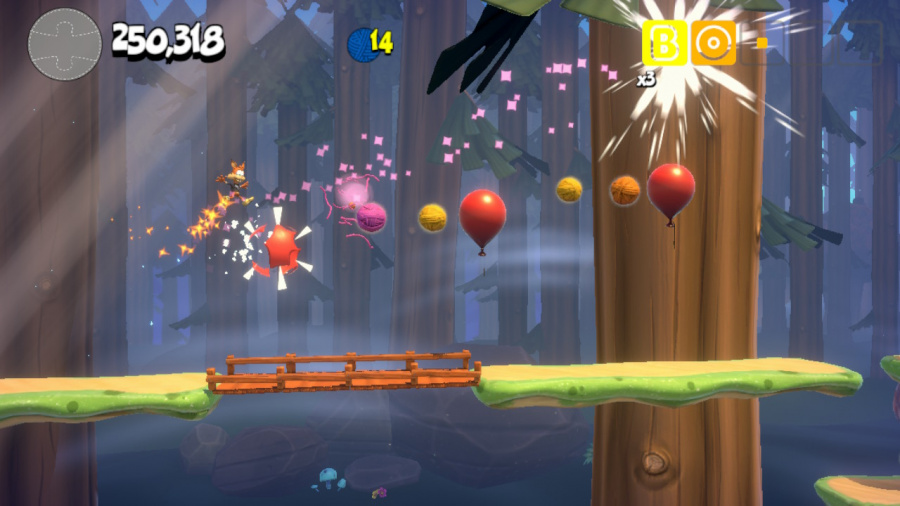 Each character has unique controls and characteristics. Bubsy glides when you hold down the jump button, has an air dash on ‘Y’ and ground pounds if you hold down on the left stick or D-buttons. Virgil shares the ground pound ability which he uses to launch off special bounce pads and also has a double jump and slides when you hold down, not unlike Commander Video from the Runner games. The Woolies pilot a UFO which essentially turns the auto-runner into a side-scrolling shmup.

Each character runs the same levels, although they have marginally different paths to collect their 150 bespoke collectables in each run. Each character earns medals used to unlock the next level and you’ll have to revisit stages with at least two characters to progress. Bubsy and Virgil’s move sets feel broadly similar and involve timing jumps between balloons, bouncing on enemies and TNT crates and nabbing yarn balls in time (more or less) to the beat. The Woolies’ stage switches things up, although it wasn’t long before we started avoiding those shmup levels altogether.

The ship feels jittery to control and the screen scrolls too fast to make it a satisfying shooter. Firing slows the speed of your ship making it very difficult to clear a path and move backwards at the same time – too often we just missed a yarn ball and frustratingly couldn’t navigate back in time to snatch it. It was unengaging and repetitive enough to make us simply skip those levels whenever we could. 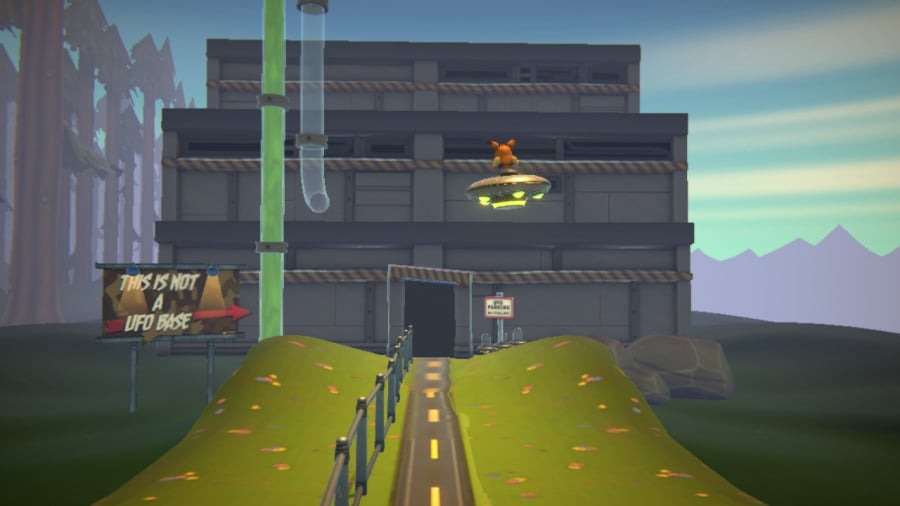 A fourth character, Arnold, is unlocked by collecting three parts of a coin in each course (with each character). Arnold’s bonus stages are unique and see him rolling down a tube, not entirely unlike the Special Stages in Sonic 2, collecting crystals and avoiding glue and farts (as you do). A control quirk means that pressing in one direction will run you up the wall but to progress onto the ‘ceiling’ you’ll have to press the opposite direction. It quickly becomes infuriating, and it wasn’t long before we started avoiding the bonus stages, too.

Bubsy: Paws On Fire’s most significant issue, though, is load times. Loading screens precede almost every transition, whether entering a level or returning to the menu. Exact durations vary – some were a breezy 10 seconds or less, others were 30 seconds or more. Mercifully, mid-game checkpoint loads after colliding with an enemy or an obstacle are very quick, but be prepared to get intimately acquainted with the cycling colours and bobcat silhouette of the loading screen.

We started playing in handheld mode and straightaway noticed frame rate dips. The stages are hardly complex but the game struggles to run smoothly – oddly, though, this wasn’t too much of an impediment to success. Unfortunately, switching to the TV made things less attractive, with noticeable jaggies hurting the already bare visuals. Each of the stages in the game’s three worlds are made up of the same repetitive background and furniture. An incredibly beautiful backdrop would be an unwelcome distraction, but the visuals are still underwhelming for a game that takes place entirely on a 2D plane, regardless of what’s going on under the hood. 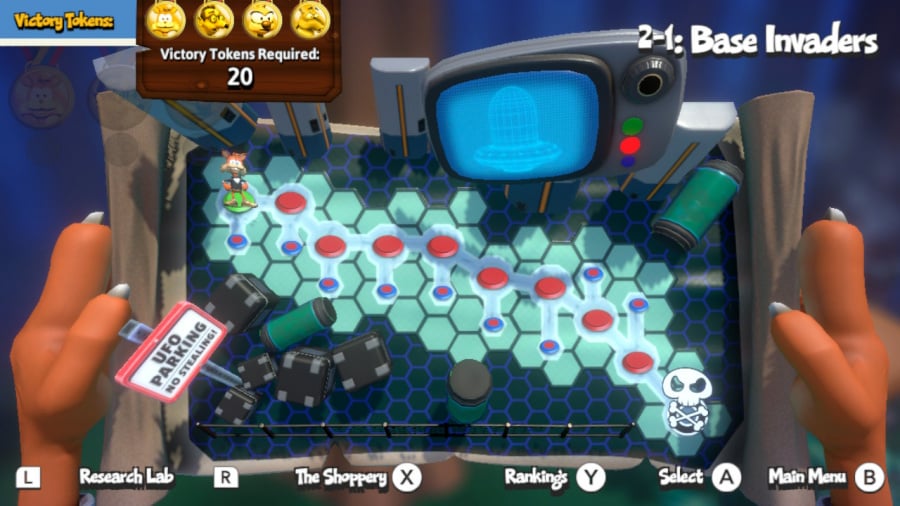 Costumes and cosmetics (that have no effect on your in-game abilities) are purchased from The Shoppery and require payment in the form of the collective yarn balls and crystals you’ve gathered with each character meaning if we wanted some new threads, we had to visit the stages we’d been avoiding. After putting Bubsy in a tuxedo, there was little incentive to return.

On the plus side, the music is pleasant enough. You certainly won’t be hunting down the soundtrack online, but it’s not grating, which is a feat considering how much you’ll hear the same tracks. The writing is predictably pun-filled, but the fact that it takes a backseat in this game means it doesn’t have enough space to become obnoxious. We even grinned once or twice. The three bosses are hardly breathtaking, but they do break up the monotony, and online leaderboards for each character offer a reason – however slight – to revisit levels. Be sure to deactivate Wi-Fi if you leave the house, though, or the game will pause after each run to search for a connection. 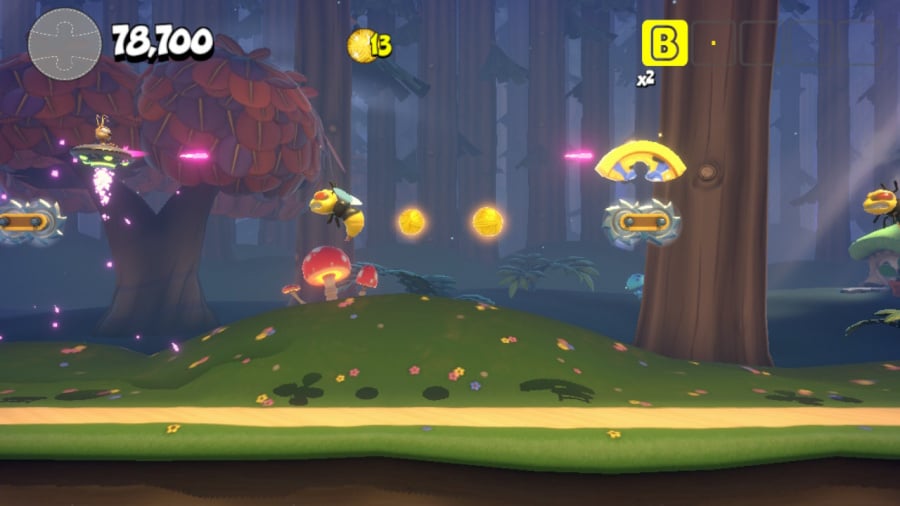 Despite all the disappointments we’ve mentioned, it’s not a terrible game – we just expected much more from the makers of the Runner series. As for Bubsy, this is arguably a giant leap in the right direction.

It’d be easy to look at the bobcat’s resumé, look at this and dismiss it out of hand. Unfortunately, although Bubsy: Paws On Fire has the foundation of a decent runner and developer Choice Provisions knows what it’s doing in terms of creating levels with an engaging flow, less than stellar performance, bland and repetitive stages, superfluous gameplay additions and long loads combine to drag the experience down. It’s not awful, it’s just nowhere near as good as the Runner series and ultimately we’d recommend ditching the bobcat and spending time in the company of Commander Video instead.

Video: This Fan-Made Zelda: Breath Of The Wild Animation Is An...