Awesome Pea is described as “a classic run-and-jump platformer,” which is about as plain and simple as the game itself. Here indeed is a platformer that looks like an old Game Boy game, and that features a whole lot of running and jumping – and precious little else. At this point, we suspect the developer would like nothing more than for us to spin off into a paean to the lost art of simplicity in game design. But this isn’t the review in which to do so, because we came away from Awesome Pea wanting more. More pace, more variety, more colour, and more fun.

Perhaps we’ve played a few too many iOS-to-Switch conversions over the past year, but we were somewhat surprised to find out that Awesome Pea hadn’t originally been a mobile game. That’s not intended as a sniffy comment by any means. It’s just that the game has a familiar bite-sized, super-focused cadence to it. The levels here are brief affairs in which you, as a smiley-faced pea, must make it to the exit, collecting as many coins and gems as you dare en route. You have a time factor to consider too, at least if you’re playing for a high score. 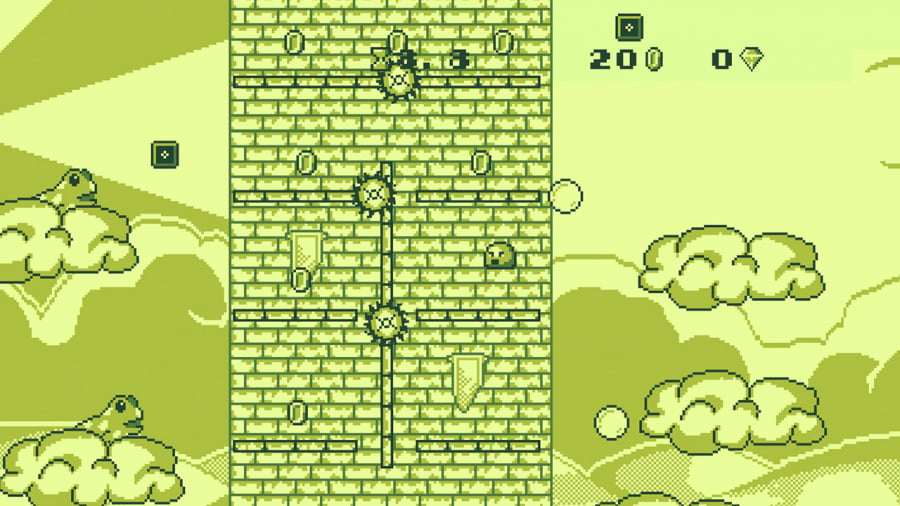 There’s a definite speed-run vibe to Awesome Pea, which makes it all the more strange that it feels so wallowy and sluggish. Our lead character moves with all the pace and purpose of, well, a legless pea, while its jumping capacity is only just on the right side of useful. And only then thanks to the presence of a double-jump. This isn’t one of those platformers where you get an intoxicating sense of weight and momentum from your protagonist. When you release the directional control in mid-air, you’ll simply stop and drop to the ground. On the plus side, that makes for a certain cold precision to the action. Conversely, it robs the game of a certain amount of life and charm.

We could cite side-scrolling platformers like Donkey Kong Country: Tropical Freeze and New Super Mario Bros. U Deluxe as instructive counter examples here, but perhaps Super Meat Boy and N++ would be more appropriate, given their indie status. Both of those latter games nail that thrilling sensation of movement just as well as their triple-A counterparts. It’s a tactile appeal that’s sorely missed in a game as stripped back as Awesome Pea.

In terms of Awesome Pea’s old school aesthetic, we dig the old school Game Boy vibe as much as the next Nintendo enthusiast website. But it doesn’t really bring anything to the wider package, other than a sense of sameness that quickly kicks in. It can also get in the way of viewability, particularly in handheld mode, while an over-eager screen distortion effect hardly helps matters. 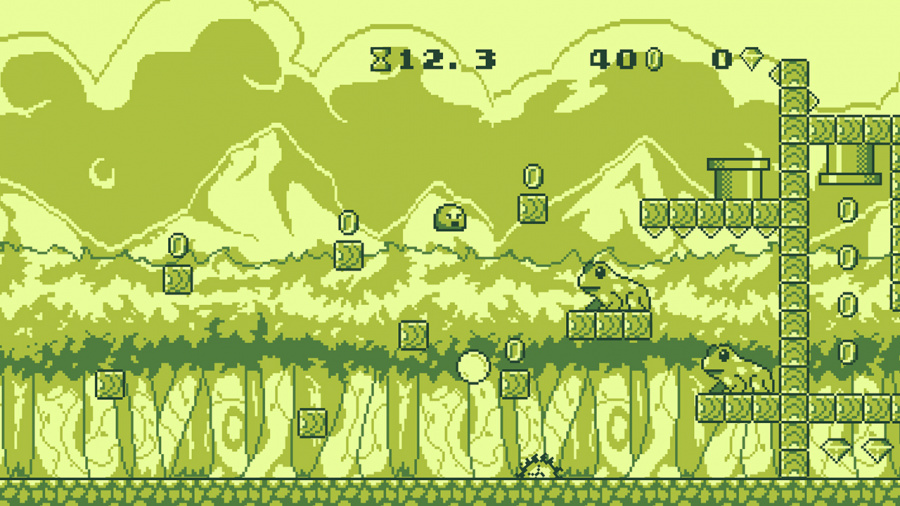 We’ve been fairly negative about Awesome Pea to date, but we should note that there is a fair portion of enjoyment to be had here for those of the right mindset. If you’re a fan of borderline masochistic challenges, where pinpoint precision and repeated retries are the natural order of things, this could be for you. Its cute and fluffy looks might be only a few small hops away from Kirby’s Dream Land on the original Game Boy, but the difficulty level is at the total opposite end of the scale from HAL’s classic.

Indeed, there’s almost a punitive feel to the game, as can be seen with some particularly punishing collision detection. Some people are really going to dig that uncompromising approach, but for our money, there’s not enough of a payoff for such perseverance. While Awesome Pea riffs on the aesthetic and the simplicity of the Game Boy classics, it fails to replicate their sense of ingenuity and warmth. It does what it does with a certain amount of cold-hearted precision, but it never revels in the bouncy joy of the old school platformers it pays lip service to.

A precise, challenging, laser-focused platformer that lacks the joyful sense of movement, ingenuity and sheer generosity of its inspiration. Awesome Pea might emulate the look and feel of the Game Boy classics, but it lacks their soul.

Learning to Guac: The Journey to Guacamelee 2, Available Now on...