Ash of Gods: Redemption wants to be The Banner Saga so bad it hurts. Everything about AurumDust’s turn-based RPG is influenced massively by Stoic’s superlative dark fantasy effort, and that’s fine. It’s got the exact same animation style, dark and brooding story, life-or-death decisions to be made, branching narrative, RPG elements, permadeath and tough grid-based combat. However, as much as it walks and talks a good game, as much as it looks and sounds the part, this is a hollow, infuriating, badly-written and bewilderingly punitive effort that very quickly drains any enthusiasm you may have to play it.

Let’s rewind a little bit. Things do start off pretty well in Ash of Gods: Redemption. This is a gorgeous game, every bit as impressive to behold as its most obvious inspiration, and it’s got a fantastic score – handled by Adam Skorupa and Krzysztof Wierzynkiewicz (yes, that’s Krzysztof Wierzynkiewicz of The Witcher 3 soundtrack fame). Early hours see you get acquainted with the central characters, each on separate personal journeys which are destined to become intertwined in the later stages of the game. Captain Thorn Brenin, Lo Pheng and Hopper Rouley are initially interesting characters, each one inextricably linked to the fate of the world here as the evil Reapers return to, well, reap during what’s known as… wait for it… The Reaping. 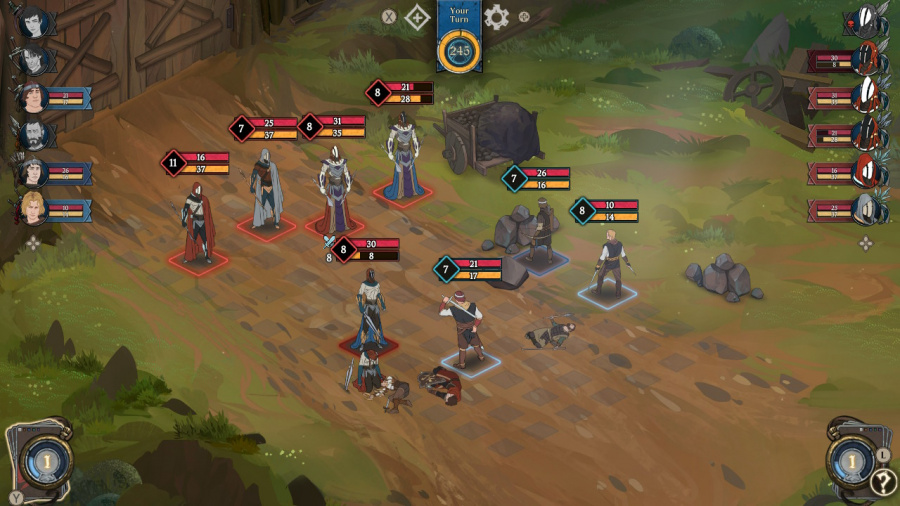 But what is The Reaping? Well, it’s something that everyone in Ash of God: Redemption’s world simultaneously knows everything about but can’t explain or believe when it occurs. This is a world filled with magic that nobody seems to believe exists, a world haunted by a history of Reapings where no-one is prepared for the next. You set out as all three main characters, picking up a bewilderingly large crew of fighters along the way in order to strike back in combat sequences you’ll instantly recognise if you’ve played The Banner Saga, except here they’re absolutely awful.

Mechanically, on the most basic level, this is the exact same grid-based combat you’ll know and maybe even possibly love from Stoic’s game but, where AurumDust have aped a look and feel, they’ve managed to make a mess of the intricacies and balance. Combat here is excruciating stuff; extremely punishing, slow and mostly nonsensical and it very often – if not always – descends into a turgid game of luck. If your enemies decide to play offensively you’ve had it; if the right bad guy moves towards you at the wrong time, all of your plans will have been for nought.

You’ll position your fighters before battle – all straightforward stuff – heavy tank lads and ladies to the front, nimble folk take up the middle ground or skirt the outside, and those all-important but weak archers and ranged attackers keep to the back lest they get taken out early. Then the battle commences, you make your first move, using up some energy to walk a few paces and set up your defence or make an attack. Fine. The enemy’s turn. A soldier walks forward a few steps and uses a ranged attack that immediately disintegrates your furthest away archer. Instant toast. Reload. 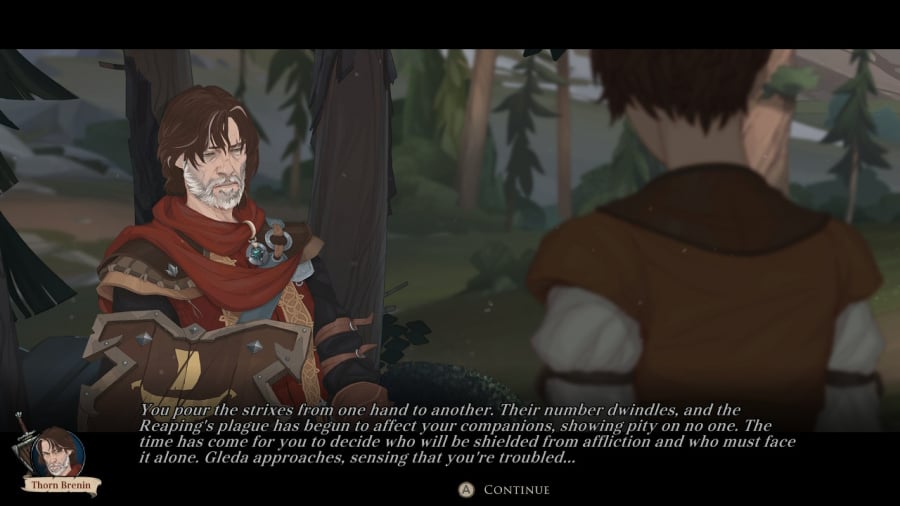 There’s never really any reliable way of preparing for what your enemy is going to do next, and this feeling of hopelessness is compounded by the fact that AurumDust has added a rubbish card game element to the fighting here. You have a stack of cards – more of which you can collect out and about in the world – that you can use at the cost of a turn to try to sway things in your favour. Maybe you’ll use a card to reduce the defence of a random enemy unit or slash their health by ten points. Fine. However, your enemies also have a deck; you can’t see it and you don’t know what it contains, but it’s better than yours and they’ll use it constantly and more often than not it will wipe the floor with your best units. You’ll make complex plans – which take a long time because of constant loading times and confusing, difficult to navigate menus – then they’ll be torn apart in an instant by things which are 100% entirely unavoidable and out of your grasp. This is not fun, this is not intuitive, this is a mess.

If there’s one place where Ash of Gods: Redemption does succeed – and this is of no comfort to you really when you’re getting massacred and restarting ad nauseam just to clear an area – it’s in making your fighter’s separate defence and health bars, as seen in The Banner Saga, a little less complicated to understand here. This is literally the only good thing we can think of about the combat; that and some beautifully gory attack and death animations, but beautiful animations can’t mask the hollow nature of your game forever and they won’t win a war for you.

Away from the turgid combat, the story which, as we mentioned, starts off intriguingly enough, soon devolves into a mess. Some of this, we expect, is down to a translation which isn’t quite up to snuff in places, but a lot more of it is down to really, really poor writing. Some of the dialogue here is excruciating, juvenile stuff. Tonally, it’s all over the place (main characters constantly ignore massive events and deaths in their immediate aftermath), almost every conversation drags on for an eternity and you’re constantly being introduced to more new characters, places and mythology without a blinking clue what on earth most of the people around you are talking about. It gets worse as it goes on, and by chapter three or four it’s insufferable. 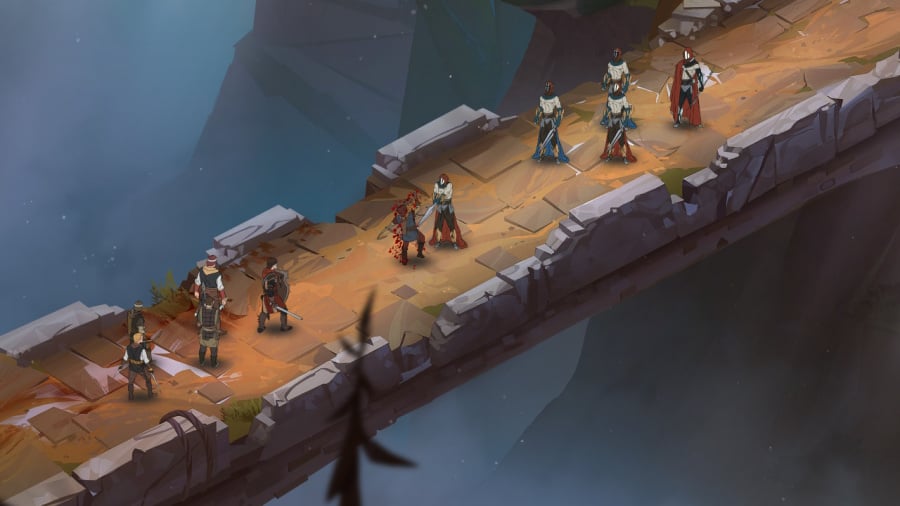 There are other problems. Life or death choices need to be made at certain points in the branching narrative here – which is normally a good thing, injecting some drama into proceedings – but here it’s just shoddy. As an example, almost immediately as you start the game you are asked to make a critical decision regarding the buying of a gift; the game explains this is of monumental importance and it seems like a tutorial in the making of choices. However, what it actually does is decide the fate of an important character in a way you couldn’t possibly fathom. The choices you make during Ash of Gods: Redemption will see friends and important units cut down without you understanding why or how the things are even connected.

The developers have stated that they want this game to be punitive, that the difficulty is roguelike in nature, death permanent and the whole thing meant to be a trial, but it’s not as simple as making things mercilessly and nonsensically tough. There’s no nuance, no connection between events. Everything here is designed to drain you, push you and force you to repeat and regret. We haven’t even mentioned the Strix system, either; these are lucky charms that protect their wearers from the effects of the plague-like symptoms spread by the reapers. You’ll need to collect tons of these and use these to keep your team fit and healthy and heal their wounds. We constantly found ourselves low on strixes and ended up at one point completely stuck in a loop where all of our party had suffered multiple serious wounds and were useless in battle, and, without any way of gathering more strixes, we had to abandon ship. It’s a potentially decent system which, like everything else in this game, turns out to be really badly designed when put into practice. 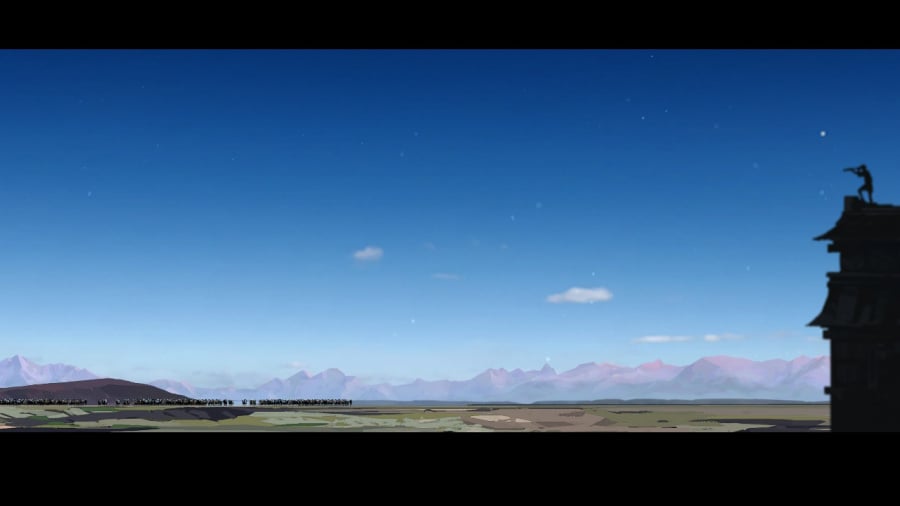 Even the decision to make your units suffer various hard-to-heal wounds during battle seems like such an unnecessary step on top of everything else you’re facing here. You can see the idea, it seems like a good one, but when combined with other systems, it’s just another overly punitive element that sucks on your enthusiasm to continue. Honestly, there’s even a morale system in play here that we haven’t even covered but let’s just say it further saps at your will to be bothered continuing. It’s hard to completely condemn a game which has very obviously had a lot of effort, craft and skill put into it – most especially in terms of its presentation; this really is a beautiful looking and sounding thing, but no matter which way you slice it, the shoddy combat, poor story, bad writing and constant withering death all add up to make Ash of Gods: Redemption a laborious thirty-hour trial.

In terms of this Switch port, this is as flawless a version of the game as can be found on other systems with no performance issues to speak of, although we did notice the world map doesn’t completely fit on the screen in portable mode. It’s also got touchscreen controls here, even though they somehow don’t really help all that much with the overly complicated menus, levelling up screens, tedious nature of moving your units around the battlefield and fiddly act of giving basic orders.

Ash of Gods: Redemption looks and sounds the part; it’s a beautiful thing to behold, easily matches its most obvious inspiration in this regard and will obviously be very tempting to fans of the genre – and especially The Banner Saga – as a result. However, beneath this shiny surface, it’s a mess. A combination of badly implemented and nonsensical mechanics, a poor story, terrible (and often juvenile) writing and a constant desire to stomp its players into the dirt make it a real pain to struggle through. It’s a hugely punitive game, which would be fine if it played by the rules – but it doesn’t. Combat here relies too much on luck and uncontrollable aspects which rob you of the opportunity to use actual skill and savvy to overcome the tough tests you’ll be put through. If you want to make your game tough, fine, go for it, but you need to ensure the systems that underpin that toughness are up to serious scrutiny and, unfortunately, here they really aren’t.

Being a New Rainbow Six Siege Player in 2019 – IGN

All Safe and Lock Combinations, Codes, and Solutions – Resident Evil...

Blair Witch Hands-On Preview: You Will Want to Protect This Dog...