The original NES Castlevania has seen its fair share of re-releases over the years, but the same can’t be said for its alternative arcade version.

VS. Castlevania was originally released for the Nintendo VS. System of arcade hardware, which for the most part offered tweaked versions of NES games designed to focus more on head-to-head gameplay. We say “for the most part” because VS. Castlevania doesn’t bother with that; despite the name, this is a strictly solo affair.

For the most part, it’s exactly the same as the NES version. The music is identical, the levels are laid out exactly as they were before, the hidden items are where they usually are, and so on. With the exception of a slightly different colour palette, to all intents and purposes this is the NES Castlevania as you know and (most likely) love it. That said, there have been a few tweaks that make it clear we’re dealing with an arcade game here. 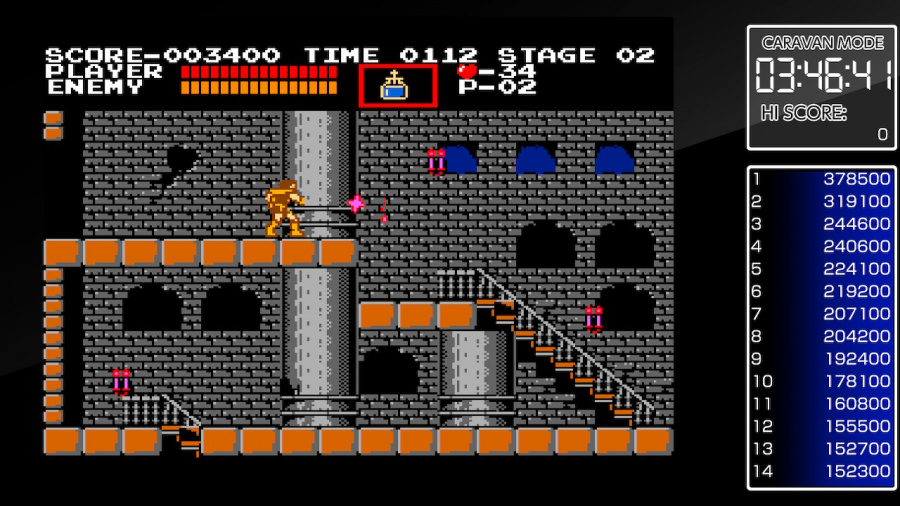 To be specific, because the whole point of arcades is to make money, Konami made two major changes to VS. Castlevania designed to trigger a Game Over faster than the home version. The first of these is a vastly reduced time limit; chances are you probably didn’t even know the NES Castlevania had a timer because it was generous, but in VS. Castlevania, if you take time to smash all the candles and collect all the items, you’re going to be really up against it. For comparison, the first stage in the NES version gives you 300 seconds, whereas the same level in VS. Castlevania only gives you 170.

The other major change is the amount of damage you take. Hit a basic enemy like a ghost and you’ll lose a quarter of your energy, which is double what you’d lose for doing the same in the NES version. This scales upwards as you’d expect; bosses and other powerful enemies can often wipe you out entirely if you don’t reach them with full health (something not entirely easy given that the timer has you rushing anyway). The energy and the timer combined, then, make VS. Castlevania notably harder than the NES game, which, let’s be honest, wasn’t exactly Nintendogs to begin with.

What’s frustrating is that this is actually one of the more impressive Arcade Archives offerings in terms of features. While Hamster’s ports are always solid, they generally tend to feature the same stock set of options: scaling, filters, a high score mode, a 5-minute Caravan mode and so on. Naturally, these are all still in here too, but Hamster’s actually taken the time to fix a notorious bug and even give players the option to remove one of Castlevania’s most annoying issues. 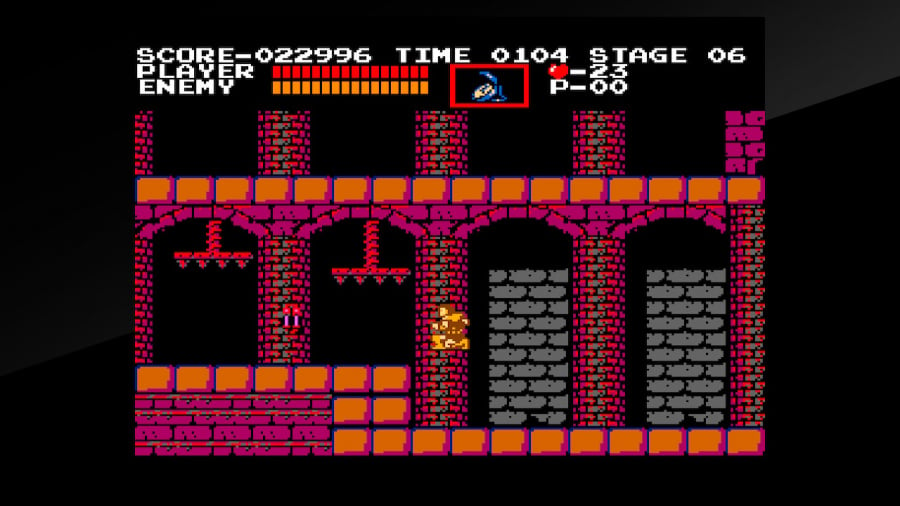 The bug fix is simply welcome: at times in VS. Castlevania, the music will cut off if you perform a certain action, so Hamster’s fixed it (though there’s the option to put the bug back in if you want authenticity). Much better, though, is an option that’s been horribly named ‘The Original Game’s Character Designs’. Turn this off and you’ll remove the sprite flickering that plagues Castlevania when enemies overlap anything. After putting up with this for more than three decades, the fact that it’s finally been fixed makes us so happy.

This doesn’t change the fact, however, that we’re looking at a definitive take on what most certainly is not the definitive version of Castlevania. The fact it saps time and energy like a vampire clamping his fangs into the neck of a particularly chubby chap means it’s simply not as fun to play as the NES version, meaning if you want your Castlevania fix you’re probably still best paying the extra to get the Castlevania Anniversary Collection, which is a little more than double the price but gives you the NES game (flickers and all) plus seven other titles in the series.

Hamster’s done the very best with what it had to work with, but the reality is that VS. Castlevania, while still essentially the same fantastic game at its core, is more frustrating to play than the NES version. You’re better off buying Castlevania Anniversary Collection, unless you’re a diehard fan of the series.

Behind the Bonkers Boss Battles of Blazing Chrome, Out Tomorrow