Huawei seems to be going strong even though it was placed on US’ entity list. The company has not stopped launching smartphones. Honor has now announced a couple of new handsets in China, one is a mid-range smartphone called the Honor 20S while the other one is an entry-level phone, dubbed the Honor Play 3. The Honor 20S is a less powerful version of the Honor 20 that runs on the Kirin 810 SoC, while the Honor Play 3 is an entry-level device that gets a bigger battery. Both handsets feature a triple rear camera setup, which consists of a 48MP main sensor.

The Honor 20S is a mid-range handset that comes equipped with a punch-hole display design and sports a 6.26-inch Full HD+ display with a 1080×2340 pixel resolution. It is powered by the Kirin 810 SoC and comes with128GB of storage and options to select from 6GB or 8GB RAM. There’s no support for memory expansion via a microSD card slot. There’s a side-mounted fingerprint sensor on the phone and it runs on Magic UI 2.1.1 that’s based on Android 9 Pie.

In terms of optics, the Honor 20S features a triple camera setup that features a 48MP primary sensor that is paired with an f/1.8 aperture lens. There’s also an 8MP ultra wide-angle camera and a 2MP macro shooter on the back. A 32MP camera for selfies is housed in the punch hole, on the front.

The Honor Play 3 runs on an octa-core Kirin 710F SoC that is paired with up to 6GB RAM up to 128GB of storage. It features a 6.39-inch IPS LCD display with a 720 x 1560p resolution and it also sports a punch hole display design to house the front facing camera. The handset is backed by a 4000mAh battery but gets a microUSB port that supports 10W charging. As for optics, the phone gets a 48MP primary sensor on the rear that is paired with an f/1.8 aperture lens. There’s also an 8MP ultra wide camera with 120 degree field of view and a depth sensor. On the front is an 8MP sensor for selfies. 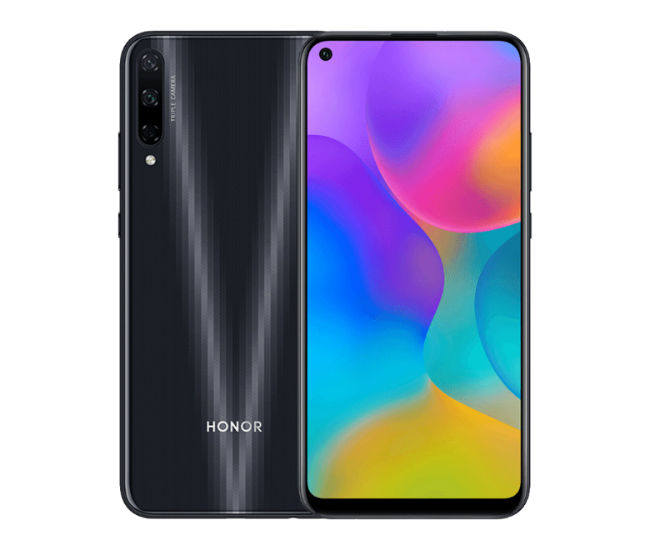