In October 1978, the Penthouse magazine had a different star. It was not on the cover, and it was not a naked lady but rather an innovative pickup truck. Penthouse contacted some of the most celebrated car designers of the time: Giorgetto Giugiaro, Bill Mitchell, William Towns, Albrecht Goertz, Dick Teague, and Curtis Brubaker – Curt, for short. They were asked to “envision the cars of 2001.” Brubaker’s was chosen as the main one. And it was a clear predecessor of the Tesla Cybertruck.

The first article to talk about the resemblance was from Jason Torchinsky at Jalopnik. Brubaker sent him the images, and Torchinsky discussed the design in three paragraphs. We thought it deserved a little more space and got in touch with the designer to learn more about the concept. We ended up with a very clarifying interview, thanks to Brubaker’s availability to answer.

One thing to be sorry about is a fire that destroyed many of Brubaker’s original designs a few years ago. “We lost a lot of LearJet, Disney and Brubaker Box stuff,” Brubaker told us. This is why the only register that the concept ever came to light is in the pages of old Penthouse magazines or on the internet.

So what has Brubaker told us about the concept? Does he believe Elon Musk or Franz von Holzhausen and his design team have taken inspiration from his design? Read our interview and discover not only that but also what Brubaker thinks of the Cybertruck.

InsideEVs – When you first saw the Cybertruck, what did you think about it?

Curt Brubaker – I alerted everyone to the 8:00 PM reveal then missed it myself.  When I caught it on Twitter around midnight, I recall thinking, “it’s a gag or a test mule…”  Frankly, with the rough door and side surfaces, my first impression was it looked like something banged together for a low-budget sci-fi film.

IEV – When did you realize it was so similar to your concept that was published in 1978 at Penthouse?

Brubaker – It wasn’t until around 1:00 AM that it hit me the shape and tailgate were close to something I’d done for Penthouse. I had to rummage around to find a forty-year-old stack of reprints of the first two pages of that article, which I had to scan with my phone. I’m pretty sure my original illustration burned years ago in our studio fire, where we lost a lot of LearJet, Disney, and Brubaker Box stuff.

IEV – Was it presented anywhere else apart from that magazine? If so, where?

Brubaker – No, done exclusively for the now-defunct Penthouse. I had pretty much forgotten about it.

IEV – How did that concept end up in Penthouse?

Brubaker – The publication called in 1978 – it may have been the author, can’t recall – to ask if I’d like to contribute to an article on future cars.  Since I was a lot younger, with more time than brains, I apparently said: why not?

IEV – Did it ever had any chance of being produced?

Brubaker – No. Production was never an issue with respect to the article – they simply wanted to engage readers.

IEV – What were your goals with that pickup truck?

Brubaker – To give Penthouse what I just said. The article was loosely defined: “Future Wheels, what might they look like?” Mine was a hybrid blend between passenger car and pickup – hopefully without sacrificing much of the utility with either.

You’ll notice, by the way, that’s pretty much the way domestic pickups are evolving… Shorter beds/larger more luxurious cabs… All in hopes of moving the ratio of USA pickup registrations from 1 in 7 to 2 in 7 Americans… It’s our hottest market.

IEV – Besides the looks, what other similarities do you see between them?

Brubaker – Similarities between my four-decade-old concept and Elon’s present-day pickup? I was suggesting four small motors at each wheel, smaller wheels with a turbine to minimize monster battery packs, and package-eating wheel wells.

We’re both shooting for an optimized flat floor with interesting ground clearance. Mine speculated on a two-level monocoque platform body – upper and lower – separated by a full-perimeter shock-mitigating bellows/bumper system – again, basic pie in the sky for 1978 reader engagement.

Elon – who also happens to be my next-door neighbor in Bel Air – opts for a one-piece monocoque with a cool air suspension for quick elevation changes. In other words, where he’s playing with ground clearance, I’m playing with fairly dramatic interior volume/payload variations.

IEV – Do you have any concrete indication that your concept inspired the Cybertruck?

Brubaker – I seriously doubt Franz or Elon saw my old Penthouse article. Even I had forgotten about it.

More interesting than the similarities between my and Elon’s designs might be the differences between ours and the e-pickups advanced by other more established manufacturers – where I’ll include Rivian and Bollinger.

You can see some of these in the tug-of-war picture below except for one difference you can’t see: our monocoque body structures vs. Ford’s frame. Other than that, you see the consistent trade-off between bed capacity vs. cab interiors – the latter growing significantly over the years, especially if you were to compare a long-bed 2-door pickup with bench seats, with its greater payload utility. 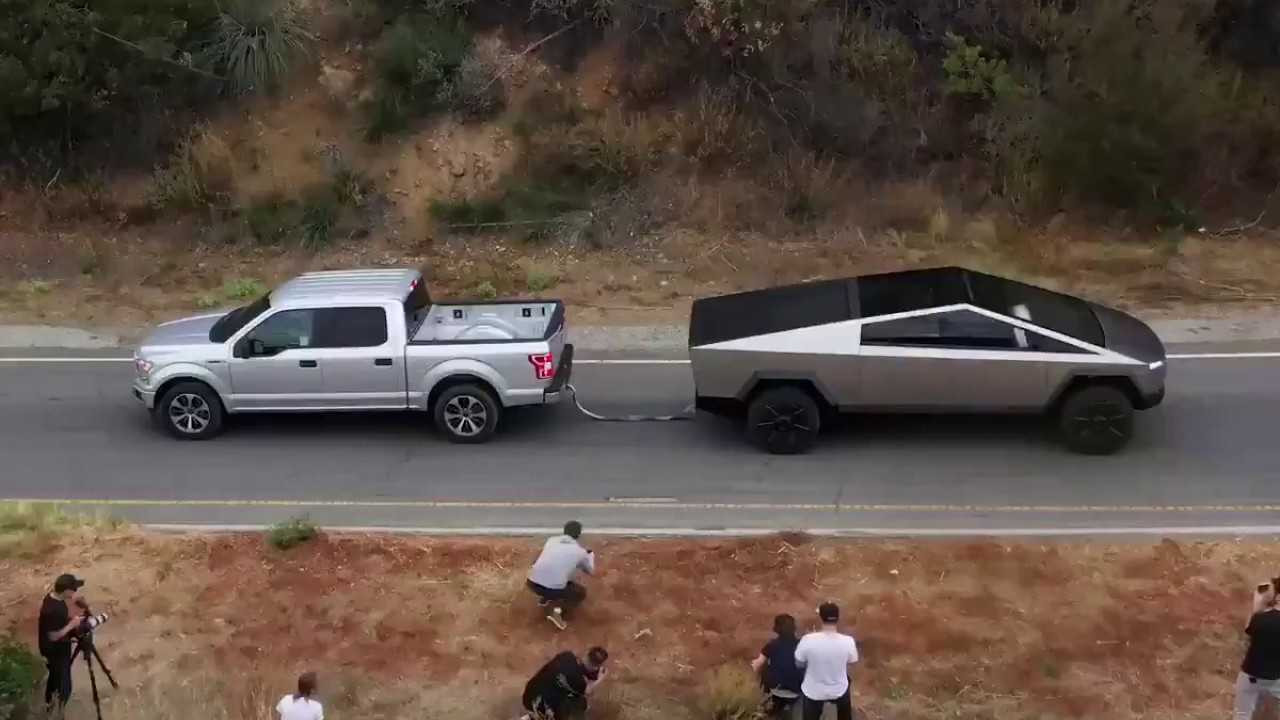 The shift has clearly been toward expanded occupant space and (family) comfort over (mission) utility. Elon’s integral tonneau-vault is a smart idea, but now he has to innovate some rear cabin openness (outward vision) for backing, maneuvering, and plain old road trip enjoyment…  Maybe he just slaps in a full-width rear window-sized display with an aft-looking wide-field exterior camera to solve that one.

Smaller remote electric motors give all designs their frunks, but there may be greater advantages to interior packaging offering access to frunk volumes from inside the cabin while underway.

As massive as Cybertruck is, its upper surfaces sloping quickly forward/aft from the peak just forward of the B-post really squeeze passenger volumes and front and rear headroom.

The big missed opportunity, in my opinion, is the complete lack of innovation in pickup bed functions, mission versatility, and payload management. These are systems we are about to change big time. In fact, I ordered a Cybertruck tri-motor to play around with on exactly this.

Overall, Americans are pretty flexible with respect to appearance preferences – especially on products owning performance extremes. Outstanding performance will quickly offset risky appearances we might otherwise have to force ourselves to get accustomed to.

Cybertruck’s unconventional shape isn’t a big deal. More problematic may be its (hard to paint) stainless finish for those who tire of looking like every other Cybertruck owners with brushed and manicured sheet metal. Already photoshopped finishes are flowing on the net.  So I’ll predict a robust vinyl-wrap business from colors to camo wherever they are sold…

Unfortunately, I can’t offer you much in the way of designs or engineering with respect to the Penthouse concept. It was just that: a concept off the top of my head for its readers. But stand by. I’m also predicting some serious pickup innovations from my team very soon.

How Shell May Speed The Transition To Electric Transportation

Free Unlimited Supercharging Is Back For Tesla Model S & Model...

Tacita Racks Up 75,000 Miles On Its Electric Motorcycle